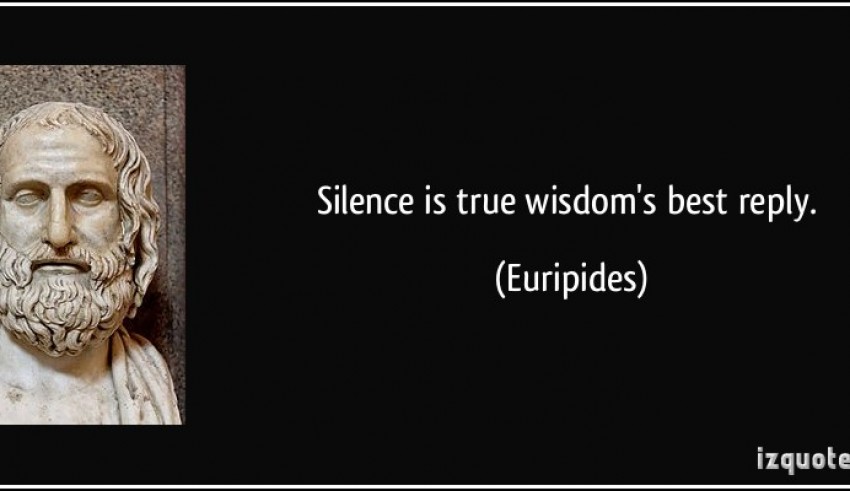 While the quote “Silence is true wisdom’s best reply” by Euripides is small, it holds quite a deep meaning in itself. It is also very controversial in itself as it depends on the situation whether silence is the best reply or not. There are times when offering advice in a situation leads to argument more than there are times when offering advice turns out to be the solution. Everyone is entitled to their own opinions and everyone certainly has their own opinions. Trying to make a suggestion at some point will only add fuel to the fire. You have a suggestion, a perceived bit of wisdom to impart to another, and they jump all over you for trying to help. Other times, there are times when staying silent is the best option left. This is most true in times of loss or grief. Often, your silence is the best and most helpful thing you can give to them.

There are times when people learn that silence is the best reply to a fool. There is no use in wasting time and energy in trying to convince someone who is not ready to listen. Some people are unwilling to listen, and are certain of their position. Anything you offer will be met with hostility, because you are obviously attacking them.

Why is silence important?

Just like in music, life needs rests from time to time when there are no words being spoken. A little bit of silence between the other notes. Imagine how messy life would be if people kept talking without stopping and even while breathing, people could be talking. Besides allowing others to be clearly heard, silence allows for others to take their turn. Silence can also be important in itself. Silence can be relaxing and restorative as well, and that’s a wise thing to do, from time to time.

Where can I apply this in my life?

Unless you are that person who talks non-stop and never lets anyone else get a word in, you probably already remain silent from time to time. But the question implied from the quote is how wisdom uses silence, and when it is the best reply. The most obvious, to me at least, use of quiet as a reply is to the rhetorical question. The proper answer to a question for which the person asking already knows the answer, is silence. The silence allows them to consider the question, and come to the proper answer without outside help. It also forces them to acknowledge that they already knew the answer, and that they can no longer claim ignorance of the answer.

There are many times in our lives where talking is appropriate. There are other times when quiet is the proper course. Wise people learn which time is which, and learn to hold their tongue when remaining silent is appropriate.