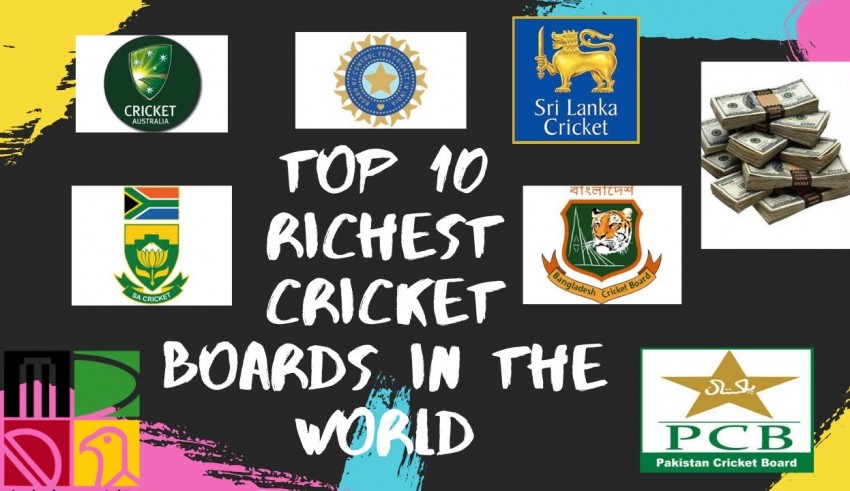 The fan following for the game of cricket is unfathomable, especially among the Asian countries, more so in the countries of the subcontinent. The cricket boards in these countries have a lot of opportunities to earn money, given the popularity of this game. Here we bring to you the top ten cricket boards which are counted among the richest in the world.

10.NZC or New Zealand Cricket Board

With a net worth of $9 million, the NZC is ranked at the bottom tier of the richest cricket boards list. While cricket falls next to Rugby as the favorite game of the locals here, the cricketers of New Zealand do get a lot of income, thanks to their participation in the game across the countries. However, the board of cricket in New Zealand still has a long way to climb.

9.WICB or West Indies Cricket Board

With a net worth of $15 million, the WICB is a governing cricket board for all the cricket-playing nations in the Caribbean. The island nations of the Caribbean have been playing as a team together since the early 1900s and were on the top of the charts between the 70s and 90s. With other American games like soccer taking over the public interest, WICB is having a tough time making enough money with the game of cricket unlike before. However, all is not lost with the Caribbean cricket league coming into play now.

While the cricket team of Sri Lanka is ranked at the top, the SLC as such is not doing so well in terms of finances. With a net worth of about 20 million, the SLC is currently surviving solely on television rights. It is a known fact that they are struggling to even pay the players which is quite evident in the anger displayed by the cricketers in public.

Counted among the richest of the sporting bodies in Australia, Cricket Australia is a public limited company. As far as the finances are concerned, CA has nothing much to worry about as the game is still a favorite and the players have been doing extremely well so far. And now with the T20 KFC Bash League, the CA is expected to grow better. Currently, their net worth is about $24 million.

With nearly $38 million to their net worth, the ZC has been a full-time ICC member since the July of 1992. They have sponsors in the likes of Schweppes, ZimGold, Sanctuary Insurance, Vega Sportswear, Castle Lager, Coca Cola, and uMax, the ZC is ranked in sixth place.

5.BCB or the Bangladesh Cricket Board

The Bangladesh Cricket Board with a net worth of $51 million has sponsors like Pan Pacific Hotels and Resorts, Aamra Network, PRAN-RFL group, Unilever Bangladesh Limited, Fresh and Brac Bank along with Qatar Airways. The Board is ranked fifth place in the world.

4.PCB or The Pakistan Cricket Board

While the entire country of Pakistan has been hit by various issues like terrorism and the board is yet to have many matches in the country, the PCB seems to be doing quite well. It is quite well known that the board has been going through rough patches and yet the finances of the PCB are on the high. This could be because the game is quite popular in the country and the players frequently visit other countries for the game. This could be the reason for the better finances of the cricket board along with the fact that there are also the television rights which contribute alongside.

3.ECB or The England & Wales Cricket Board

Rated at the top three to be the richest cricket boards of the world, the ECB has a net worth of $59 million.           England is the birthplace of cricket and the game is quite popular here for all three formats of the game and there is no reason as to why they wouldn’t have a good earning. The Twenty20 Cricket was invented by ECB and while they don’t have a franchise-based league, it is still quite a popular game in the country. Not only because the board is among the top three richest boards in the world, but also because they are the inventor of the game, the ECB has a definitive say in bigger cricketing decisions.

With a net worth of $69 million, the CSA is ranked second in the top richest cricketing boards list. And yet the CSA has been making a lot of losses in comparison to their earnings, which is also not less. Their finances depend on the television rights and the other teams which tour their country for games. The good news though is that the team of South Africa has been performing quite well.

1.BCCI or Board of Control for Cricket in India

With a whopping net worth of $295 million, the BCCI is ranked at the top of the richest boards in the world. The board seems to be blessed with a golden touch that they reap money everywhere. Before India won its first World Cup in the year 1983, the BCCI had a tough time even paying the salaries for their cricketers. Another big milestone was the introduction of the Indian Premier League which multiplied the income more. With people who love the game passionately, there is no sunset for BCCI finances for a long time now.

Which Is The Richest Of The Cricketing Boards?

BCCI is the richest with rising income and is also the highly influential board. Other Cricket boards wait for matches with India to build up their finances. Also, BCCI is independent of its government.

Which Cricket Board Pays More To Cricketers?

Even though BCCI tops in the riches, it is ECB which ranks on top in paying the players. The players are paid annually at ECB. The ECB also won 13 white ball and ten test contracts in the year 2018.