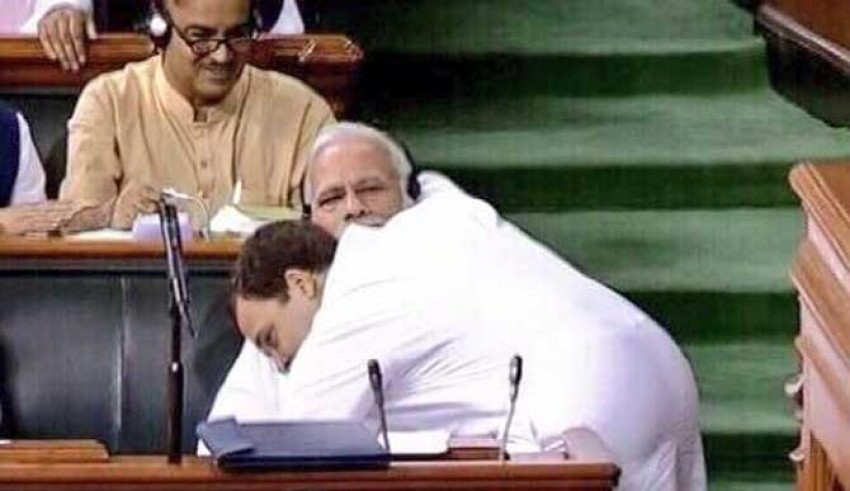 While the parliament has many odd days throughout the years, today’s was a complete exception. It was the first time when the no-confidence motion debate in the Lok Sabha had so many happening things coming up back-to-back. The phenomenon of a hug, a wink, a slip of tongue and loads of laughter made it a remarkable day for the parliament as we see the exchange of favors (both good and sarcastic) between the two leaders Prime Minister Narendra Modi and Congress president Rahul Gandhi.

While some quotes it scripted, it might have been an impromptu pomposity of Mr. Gandhi that the speech which started with strict criticism of PM Modi’s Jumla’s and unkempt promises, ended up Rahul hugging him amid the assembly.

Rahul was more of an entertainer ensuring that each attendee in the parliament splits in laugher either at him or with him.

When Rahul Gandhi slip his tongue:

Being a big mouth, Gandhi has made a fun of him a number of times and the several Pappu (Rahul Gandhi’s fun name) jokes prove the claims. He admitted that BJP and a world makes fun of him by calling him Pappu. Also, while referring to an incident, Gandhi pronounced the Hindi word “Bahar” as “Bar” which make the ruling alliance burst into laughter.

PM Modi And The Laughter:

Soon after the “bar” statement, Rahul came up with another statement which made Modi laugh anew. While debating, Rahul said that he can sense the nervousness in Modi Ji. “He is looking away from me. I can understand that. He cannot look into my eyes, I can see that because the Prime Minister has not been truthful,” he said. Hearing this surely made Modi guffaw while mocking Rahul.

The critics are baffled as for how a person (Rahul Gandhi) criticizing the PM for his incompetency and unkempt promises suddenly rises from his seat and walks towards the PM only to hug him. It was an “awkward” moment, say critics. PM Modi was left startled by the series of events but soon recovered and pat Gandhi’s back before shaking hands with him. They did share some words which are yet a secret.

The Next Winking Sensation:

Rahul Gandhi, after making everyone speechless with the hug, returned to his seat and was seen winking on someone while talking, perhaps about the “hugoplamacy”. Critics are claiming that the hug was nothing but a taunt to PM Modi for his frequent hugs with world leaders.

Rahul Gandhi has given us a number of instances to laugh about, but, this one was surely different. Congress is trying their best to beat the ruling party in the upcoming elections in 2019. However, Modi gave them a befitted reply when his turn to take the mic came. His befitting reply tore the opposition apart.