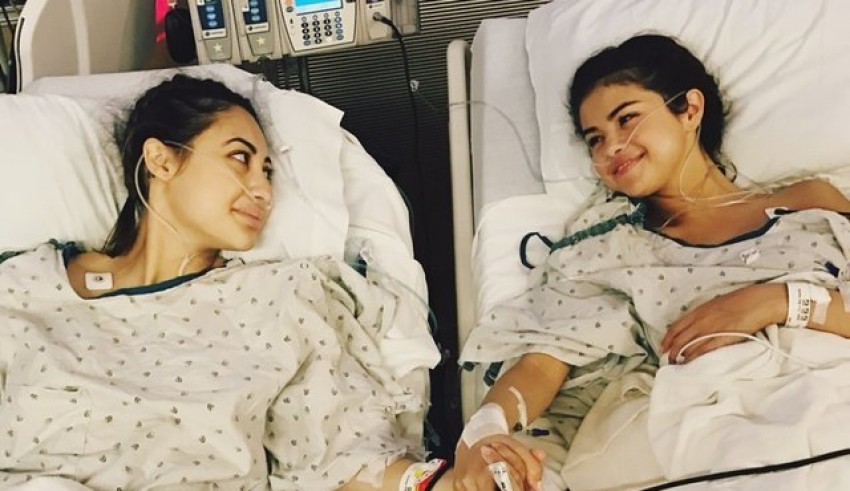 Selena Gomez, earlier this month, revealed to stupefied fans that she had to undergo a kidney transplant as part of her ongoing battle with lupus, which is a chronic autoimmune disease that can damage any part of the body (skin, joints, and/or organs), according to resources.lupus.org/entry/what-is-lupus.

The reveal came as a shock to her fans all over the world, who prayed for her quick and full recovery. Fans were equally grateful towards her donor, Selena’s good friend and actress, Francia Raisa. Raisa’s kind deed is said to have doubled the singer’s life expectancy.

In 2015, Gomez revealed to fans that she had been battling lupus. Lupus affects roughly 1.5 million people in the US and has no cure, till date.

Raisa recently took to Instagram and proudly showed off her scars, post the surgery, in a video of her working out. The 29-year-old actress seemed to be in a fit condition in the video and captioned it, “Happy to be back.”

Gomez also posted a picture on Instagram, while revealing about the surgery to her 127 million fans, and thanking Raisa for her contribution and priceless gift. “There aren’t words to describe how I can possibly thank my beautiful friend Francia Raisa”. Gomez also wrote. “She gave me the ultimate gift and sacrifice by donating her kidney to me. I am incredibly blessed. I love you so much, sis.”

Raisa also opened up about her part in saving her best friend’s life and thanked God for allowing her to help her friend and in the process, change her own life.

The two have been the best of friends since 2007. Kidney transplants are considered to be a very difficult operation as there is a lack of appropriate donors. Donors who are willing like Francia Raisa could definitely help many in severe need of the same! It is indeed a beautiful sight to see such a lovely relationship between the two and the lengths these two are willing to go for each other.

Read the tweets of Selena Gomez and Francia Raisa below to get a glimpse into the love and bond these two besties share!

I’m very aware some of my fans had noticed I was laying low for part of the summer and questioning why I wasn’t promoting my new music, which I was extremely proud of. So I found out I needed to get a kidney transplant due to my Lupus and was recovering. It was what I needed to do for my overall health. I honestly look forward to sharing with you, soon my journey through these past several months as I have always wanted to do with you. Until then I want to publicly thank my family and incredible team of doctors for everything they have done for me prior to and post-surgery. And finally, there aren’t words to describe how I can possibly thank my beautiful friend Francia Raisa. She gave me the ultimate gift and sacrifice by donating her kidney to me. I am incredibly blessed. I love you so much sis. Lupus continues to be very misunderstood but progress is being made. For more information regarding Lupus please go to the Lupus Research Alliance website: www.lupusresearch.org/ -by grace through faith

Happy to be back

What Is Prabhas Up To After Baahubali?

After the massive success and record-breaking streak of Baahubali: The Conclusion, Tollywo…