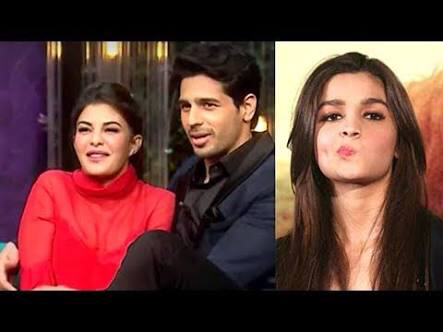 Recent rumours that Jacqueline Fernandez had unfollowed her boyfriend Sidharth Malhotra’s ex, Alia Bhatt on Instagram have made us have the opinion that all is not well between the two immensely successful Bollywood beauties, but now sources say that there is no bad blood between them.

In fact, both of them seem to joke about the rumours, and are said to find it incredibly amusing. They are apparently intrigued about where all this news keeps coming from. The two are said to be discussing the ridiculous gossip among their friend circle and laughing the whole thing off!

The rumours started going around when it was revealed that Sidharth Malhotra and Alia Bhatt had broken up a while ago and Jaqueline’s proximity and intimate scenes with Alia’s ex on the sets of their film, A Gentleman: Sundar Susheel Risky, apparently had irked Alia greatly. Jaqueline and Sidharth were later claimed to be dating as well!

Now a source close to the two megastars further states that Alia and Jacqueline are cordial with each other, and get along very well. And here is the surprising thing, it seems like Jacqueline has never even followed Alia on Instagram! It came as a shocking revelation to the two ladies as well. They do, however, follow each other on Twitter.

So there you have it! Pepnewz can claim with a sense of confidence that the rumour was indeed false, and there is no love lost between the two because of Alia’s ex and Jacqueline’s rumoured current boyfriend, Sidharth Malhotra.

After the release of A Gentleman on 25 August 2017 and its subsequent disappointing box office and critical performance, Jacqueline is currently working on ‘Judwaa 2’ alongside Varun Dhawan and Tapsee Pannu. On the other hand, Alia will next be seen with Vicky Kaushal in Meghna Gulzar’s ‘Raazi’, produced by Junglee pictures and Dharma Productions followed by Reema Kagti’s Gully (opposite Ranveer Singh) and Ayan Mukherji’s Dragon (opposite Ranbir Kapoor), after last being seen in Badrinath Ki Dulhania co-starring Varun Dhawan.