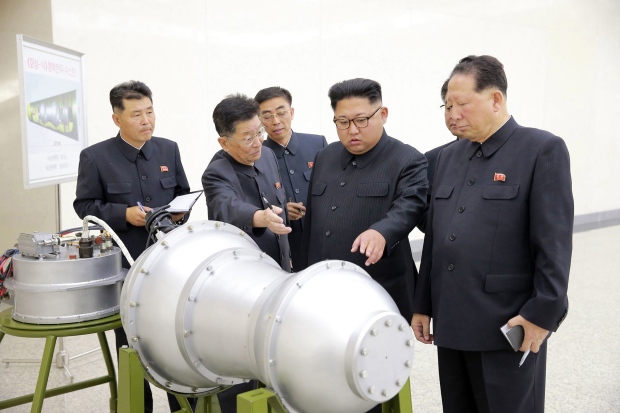 At 0330 GMT on 3rd September 2017, an earthquake of magnitude 6.3 hit the North Korea. The epicenter of the earthquake according to U.S. Geological Survey was 24 km East North East of Sungjibaegam. Countries like China, USA, Japan and South Korea worry it to be a man made earthquake caused by the sixth nuclear test done by North Korea. Hours before this earthquake Pyongyang has claimed that its leader has inspected a Hydrogen Bomb meant for a new intercontinental ballistic missile. It also released an image showing its leader Kim Jong Un at an undisclosed location.

Responding to this event Japanese Prime Minister Shinzo Abe stated the need for a strong protest against this nuclear test. He said

“If it (North Korea) forcibly conducted a nuclear test, it’s absolutely unacceptable.We have to strongly protest it.”

However later today at around 0700 GMT putting an end to speculations North Korea announced officially that it has successfully completed its 6th Nuclear Test which is also the 4th under the leadership of Kim Jong Un.It also claims that no radiations have been released in the environment.The test done today is estimated to be 10 times more powerful than the last nuclear test it did on 9th September 2016.

Earlier this week on Tuesday Kim Jong Un’s test firing of a missile over Japan had not gone well with the rest of the countries in the world.The American President Donald Trump warned through a tweet which read

“THE U.S.has been talking to North Korea and paying them extortion money, for 25 years.Talking is not the answer!”

However, the sixth nuclear test done today makes it clear that the North Korean dictator does not pay much heed to the warnings of Trump and is showing the world time and again its capability as a nuclear war head.

Much troubled by the happenings South Korea’s President Office said it will hold a National Security Council Meeting chaired by Moon Jae in. South Korea’s military awaits the U.S. reaction for mulling a variety of possible responses which could be done in collaboration with the U.S.

For humanity as a whole display of nuclear power always seems to be a potential prophecy or an underlying warning of destruction.