November 29, 2022
6NewArticles
Home Technology The Largest Asteroid That Passed By The Earth Has Two Moons 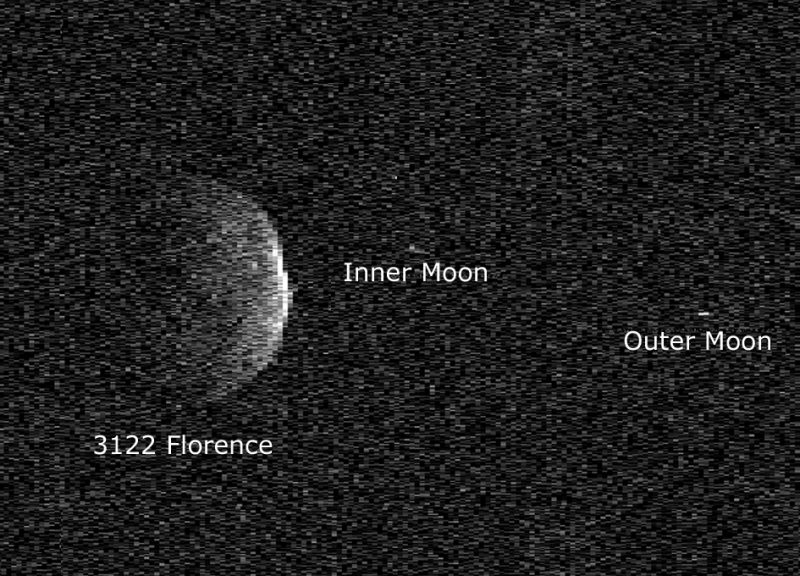 Radar images of asteroid 3122 Florence obtained at NASA’s Goldstone Deep Space Communication Complex recently have revealed that the asteroid has two small moons, and also that the main asteroid is approximately 4.5 km in size. Out of the 16,400 asteroids that have been discovered, Florence is only the third triple asteroid that Earth has witnessed. Pictures had been taken from August 28 to September 1, 2017.

The asteroid’s slow journey provided a great opportunity for astronomers to research and study the asteroid with big radar equipped dishes. And they have come to know much more about the asteroid than ever.

The sizes of the moons are not known but have been estimated to be around 100-300 m. The time for an orbit of the inner moon is around 8 hours, while the outer moon takes approximately 22 hours to complete an orbit. The inner moon has the shortest orbital period of the 60 asteroids known to have moons.

The radar images also provide a close-up view of the asteroid. The Florence is fairly round, though it has a ridge along its equator, and at least one crater, two flat large regions, and other features. The Florence also rotates every 2.4 hours, it has been discovered. The geometry in radar images can be compared to seeing an object from the North Pole.

More discoveries will probably come in the days ahead as the radars continue to run for a week more. The resulting radar echoes will achieve incredible signal-to-noise ratios.

It is also the closest an asteroid has come to earth in a long time. Usually, asteroids the size of cars hit the earth’s atmosphere every year, but burn out before they reach the surface. Thankfully, scientists do not believe that Florence will be hitting the earth anytime soon.

Asteroid 3122 Florence was discovered on March 2, 1981, from the Siding Spring Observatory in Australia. It was named after Florence Nightingale, the founder of modern nursing. It is predicted that the asteroid will not come as close to Earth as it did on September 1 till 2050.