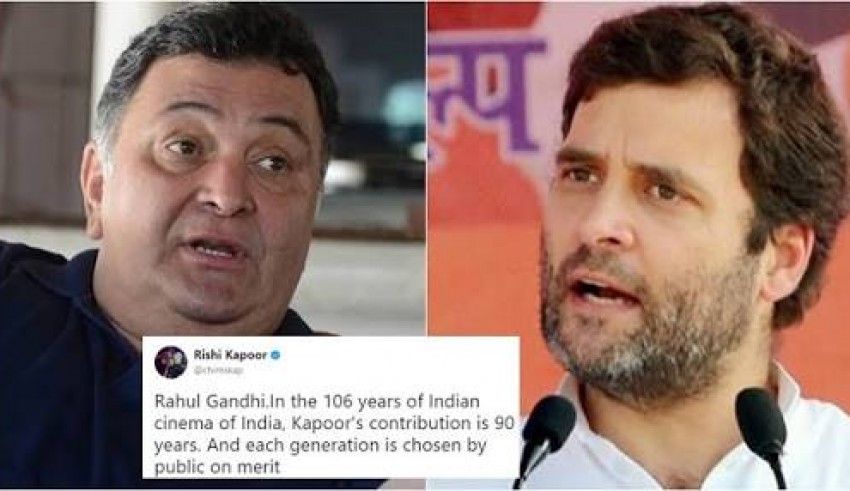 Actor Rishi Kapoor has done it again! The actor who is known for his anger and Twitter rants has taken to twitter again, this time rebuking Rahul Gandhi for his offensive comment about existence of dynasts across India, including Bollywood.
The actor took to Twitter to warn the Mr. Gandhi “to not bullshit people on dynasty” and chimed in saying that one has to earn people’s respect through their hard work.
Citing the instance of famous actors in his own Kapoor family, which has been the royalty of the Indian Cinema for the past 90 years, Rishi Sir has said that all the members of the family have been loved because of their talent and have earned immense respect from the audience.

The 4 generations: Prithviraj Kapoor, Raj Kapoor, Randhir Kapoor and Ranbir Kapoor has ruled bollywood because of their talent no other reason, he said.
He asked Rahul not to bullshit people on “Dynasty”. People’s love is to be earned through through hard work not zabardasti and gundagardi.
Kapoor’s comments came after Rahul dropped Abhishek Bachchan’s name while talking about “dynasty politics” as he addressed people at the University of California in Berkeley, United States.
Rahul himself hasn’t taken the criticism lightly hitting back on Tuesday at those who have accused him of benefitting from “dynasty politics”, and justified the criticism against him, saying that the entire nation is running on it and hence, one should not attack just him.
“Most of the country runs like this. Akhilesh Yadav is a dynast. Stalin is a dynast. Dhumal’s son a dynast. Even Abhishek Bachchan is a dynast. Also Mr. Ambani. That’s how India runs. Don’t go after me” he said.

Such ignorant comments when coming from the son of a powerful political family is the reason why people like Rishi Kapoor are forced to speak up. Many people who have taken offence to the comments, feel Rahul Gandhi, son of Sonia and Rajiv Gandhi is just trying to justify himself and his actions by diverting the public scrutiny from himself to others.