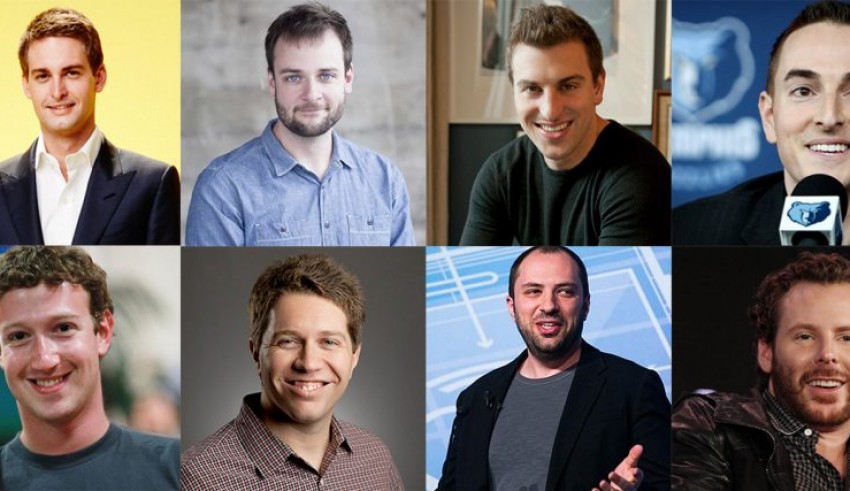 They are not the suits from your grandfather’s generation. They are tech-savvy, T-shirt clad, wearing jeans, and changing the world. They gave ‘get rich quick’ a whole new meaning. They’ve made their money years before many others by incorporating millennial tech into a number of fields—social networking, lodging, and transportation, to name just a few. They are the youngest tech billionaires who made their cold-hard cash using the various technological advances that they came up with. They are the inspiration for the young students today and the motivation for those who are still struggling through the phase before success. The list, as put up by Forbes, is as follows:

With a net worth of more than $50 billion at just 32 years of age, Mark Zuckerberg tops this list of the world’s top tech billionaires under 40. He is the founder of Facebook and holds a major stake in the company. Also, he owns other social platforms like WhatsApp and Instagram. Mark Zuckerberg’s net worth is more than the combined net worth of all the others in the list. Zuckerberg made his first billion when he was just 23 years old, and on the wings of Facebook’s soaring stock price, has added $13 billion to his fortune just this past year. He is now the fifth richest person on the planet.

Dustin ranks second in the list but his net worth is far less than that of Zuckerberg. At the same age as Zuckerberg, he trails behind at $10.8 billion. He is an American Internet entrepreneur who co-founded Facebook with Mark Zuckerberg, Eduardo Saverin, Andrew McCollum and Chris Hughes. In 2008, he left Facebook to co-found Asana with Justin Rosenstein. Dustin, along with his wife, co-founded Good Ventures, a private foundation and philanthropic organization in San Francisco.

Eduardo Saverin, 34, is also one of the original co-founders of Facebook and has a net worth of $7.4 billion. In 2010, Saverin co-founded Aporta, an online portal for charity. In 2016, Saverin’s fund closed initial deals of over $140 million in Asia, including $30 million in up and coming regional logistics startup Ninja Van.

At 37, Garret Camp has a net worth of $6.3 billion. He is a Canadian businessman and investor. He co-founded StumbleUpon, a web-discovery platform, while in graduate school at the University of Calgary in 2002 and co-founded Uber, a transportation network company in 2009.

Frank Wang, 35,  is a Chinese businessman who is the founder and chief executive officer of DJI (Dà-Jiāng Innovations Science and Technology Co. Ltd), a Chinese technology company headquartered in Shenzhen, Guangdong, which manufactures unmanned and autonomous aerial vehicles, flight controllers, Zenmuse aerial gimbals, Ronin ground gimbals, cameras and FPV Goggles. He has a net worth of $3.6 billion.

Nathan “Nate” Blecharczyk, 33, is an American business executive and entrepreneur. He is the co-founder and chief strategy officer of Airbnb and Chairman of Airbnb China. Blecharczyk was also the company’s first chief technology officer. His net worth is estimated to be around $3.3 billion.

Brian Chesky, 34, is an American Internet entrepreneur who co-founded the hospitality exchange service Airbnb. Chesky is the CEO of the company and was named one of Time’s “100 Most Influential People of 2015”. His net worth is also estimated to be around $3.3 billion.

Joe Gebbia, 34, at a net worth of $3.3 billion, is an American designer and Internet entrepreneur. He is the co-founder and Chief Product Officer of Airbnb. In 2009, Gebbia was listed in BusinessWeek’s Top 20 Best Young Tech Entrepreneurs.

Robert Pera, 39, is the founder of Ubiquiti Networks, Inc. a global communications technology company that Pera took public in 2011. His net worth is estimated by Forbes at $3.0 billion.

Sean Parker is an American who cofounded the file-sharing computer service Napster and served as the first president of the social networking website Facebook. He is estimated to be worth $2.4 billion and is 36 years of age.

Adam Neumann is the cofounder and CEO of communal work space giant WeWork. The company he founded in 2010 with Miguel McKelvey has since has raised more than $2.5 billion from investors like Goldman Sachs and Softbank. At 37, he is estimated to be worth $2.4 billion.

Scott Farquhar, 36, is an Australian billionaire, the co-founder and co-CEO of the software company Atlassian. He is estimated to be worth $2.2 billion.

Michael Cannon-Brookes, 36, is an Australian billionaire, the co-founder and co-CEO of the software company Atlassian. He is also estimated to be worth $2.2 billion.