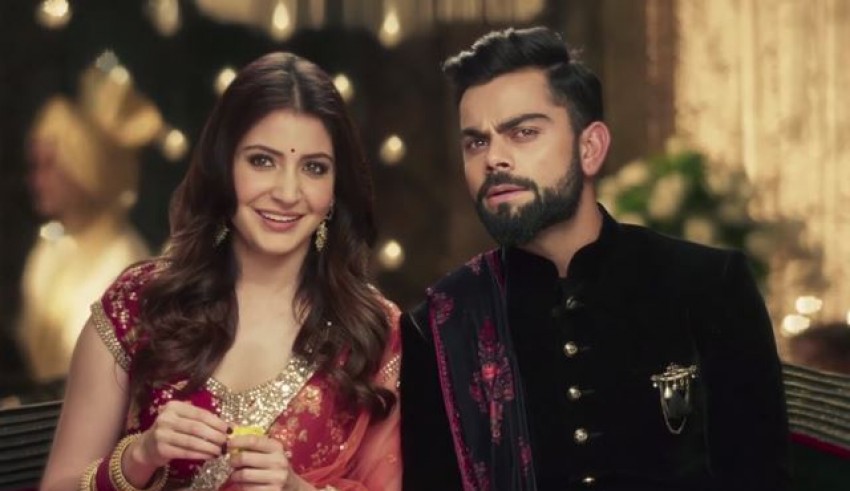 One of the most popular couples of the country is that of Virat Kohli and Anushka Sharma. There is a great deal of interest surrounding the couple and everything that they do. Everything that they do, captures the attention of everyone across the country. Hence, it came to no surprise that Twitter went berserk after the Anushka-Virat ad aired on national television. The advertisement has managed to capture the imagination of the audience, who have taken to Twitter to make hilarious memes.

Twitter users took different hilarious takes on the couple’s new advertisement. From one user capturing a lovely moment from the ad, with a caption that says when you see your food finally arriving at the restaurant, to another user creating a meme that Virat Kohli loves Anushka Sharma so much that he would watch Bombay Velvet 2 for her.

Another Twitter user showed Anushka asking Virat what his choice would be between FRIENDS and Game of Thrones, to which he answers Tarak Mehta Ka Ooltah Chashma, to which she replies that they should get married.

While Anushka Sharma may not speak about her romantic life, Virat Kohli has been open about his role in the relationship. There has been a lot of interest spiking about their relationship. In their work life, Virat Kohli smashed a century against New Zealand at the Wankhede Stadium in Mumbai, becoming the second-highest century-maker in One-day International Cricket, crossing Ricky Ponting and trailing behind only Sachin Tendulkar, who has 49 ODI centuries to his name. On the other hand, Anushka Sharma is all prepared for her next production venture, a horror film entitled Pari. She has also committed to appear in a comedy Kaneda, alongside Arjun Kapoor and Diljit Dosanjh, and has also shot for a brief role in Rajkumar Hirani’s biopic of Sanjay Dutt, entitled Dutt.