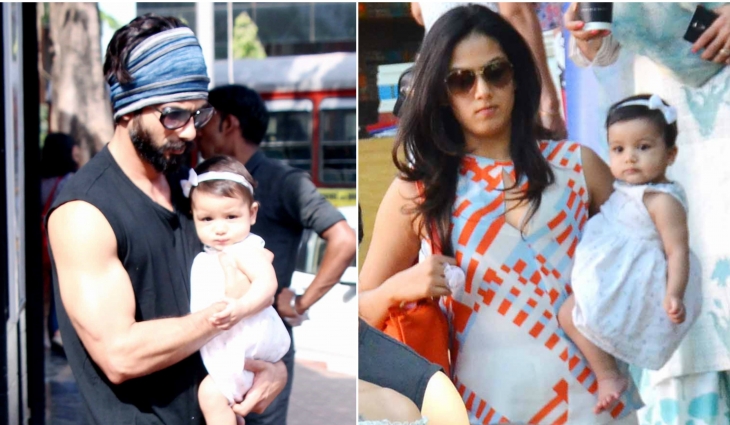 Mira Rajput celebrated her birthday yesterday and Shahid Kapoor posted the cutest family pictures on Instagram. The couple posted pictures with their one-year-old daughter Misha. Mira Rajput turned 23 yesterday and instead of having a huge event, the family kept it simple and private. They celebrated Mira’s birthday in the garden in their backyard. Shahid Kapoor is quite active on social media and he posted pictures of the celebration on his Instagram handle.

In the first picture, Misha is seen trying to get her hands on the cake. She seems excited like a typical child would be seeing chocolate cake. She seems to be grabbing on to a huge chunk of the cake. Shahid posted the picture with a caption, ‘Birthday Party in the backyard #justus happy birthday my love Mira’. The family looks adorable together. In the second picture, Misha is eating the cake and looking straight into the camera. Shahid shared this picture with a caption, ‘Guess who finished mommy’s birthday cake’.

In the beginning, Shahid was very protective of his daughter when it came to the paparazzi. But now it seems that the actor cannot keep from showing off the cuteness of his daughter. His Instagram profile is filled with pictures of Misha and all the pictures are quite adorable. Shahid is all set to appear in Sanjay Leela Bhansali’s upcoming period movie, Padmavati. It is rumoured that the Udta Punjab star might not have a full role in the movie but might just have an extended cameo. This is Shahid’s first movie with Sanjay Leela Bhansali and it is set to release in November, later this year. There are also rumours floating around B-town that Misha and Mira are soon to star in a commercial. With her adorable looks, Misha is soon going to be one of the most sought after star kids of Bollywood.