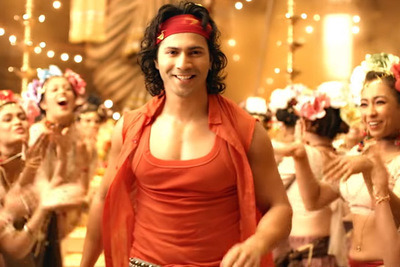 Dad David Dhawan’s new movie, Judwaa 2, a reboot of the 1997 film of the same name, has caused a problem for Varun Dhawan, or rather for one of his characters in the film, Raja.

In a recent telephone call with RJ Malishka from RED FM, Varun Dhawan opened up about his upcoming movie ‘Judwaa 2’and  how he plays a double role in the film- that of identical twins Raja and Prem. The newly launch song titled ‘Suno Ganpati Bappa Morya’, featured in the film is already a hit, all thanks to its catchy tune composed by Sajid Wajid, written by danish sabri, sung by Amit Mishra and  an amazing dance performance by Dhawan himself, which isn’t really a surprise considering the star’s dancing prowess.

In the song, Dhawan’s character Raja is complaining to Ganpati Bappa of getting too much female attention as is heard in the hook, ‘….pareshaan kare mujhe choriya…’.  The song, released right in the middle of the festive season, is sure to become a hit visarjan anthem to groove to.

Watch the video of the song here:

A beautiful thing to take away from the conversation is how a festival brings people of various different communities and religions together. Varun Dhawan talks about his friends who are Gujaratis, Muslims, and Sikhs and yet celebrate Ganesh Chaturthi with the same energy and devotion as everyone else.

The movie, which hits the theatres on 29th September 2017 also features Taapsee Pannu and Jacqueline Fernandez as Dhawan’s leading ladies. Salman Khan, who starred in the original Judwaa film released in 1997 also has a cameo in the upcoming reboot of the same.

Better Late Than Never: NCERT To Finally Update Its Books

The National Council of Educational Research and Training (NCERT), an organization that pr…