November 29, 2022
6NewArticles
Home Politics National Harnidh Kaur Writes About The Dera Followers And It Is An Eye Opener 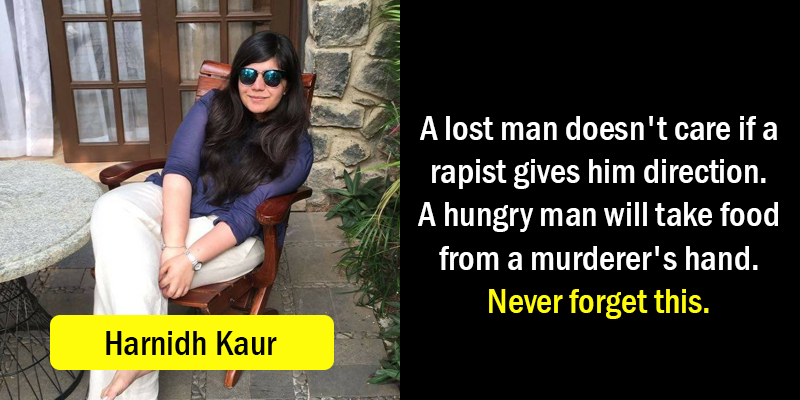 When the followers of Dera Sacha Sauda protested against the verdict of their Guru, the world was quick to judge them for supporting a convicted rapist. No one tried to think from their perspective until one Facebook user posted a status, explaining all about the situations under which the people came to follow the Dera Chief, Gurmeet Ram Rahim Singh Insaan. Harnidh Kaur posted a long status, explaining the underlying story of the beginning of Dera Sacha Sauda and all deras in general. We might call the Dera followers disillusioned or following a blind faith but the circumstances under which they came to follow the faith would surely bring a little sympathy even in the coldest of hearts.

Harnidh Kaur is a graduate from Lady Shri Ram College and her post is all about the unrest that was created by the Dera followers after the verdict. She writes that there was no way anyone could talk about the violence that the followers created without thinking about the creation of the Dera itself. She explains how Dera Sacha Sauda has given an identity to the oppressed and backward castes in Punjab and surrounding areas. She writes about how even though the people from the backward castes had converted to Sikhism, a religion that is based on the belief of no castes, but remained oppressed and unrepresented in SGPC and other Gurudwara committees.

Harnidh Kaur underlines the basic cause of creation of deras in Punjab and surrounding areas as this oppression, along with an economic insecurity and lack of education. All these causes made the people feel lost and Dera Sacha Sauda was the knight in shining armour for them, swooping in to save the day. The Dera educated the people, provided them with jobs, and gave them a general purpose in life. This saved quite a few of the oppressed castes from falling for drugs. She writes that a lost man would not care if it was a rapist who gave him the right direction just like a hungry man would not care if it was a murderer who fed him for a night. They would be grateful to the one who came to their help.

She writes about perspective too, saying that what non-followers would perceive as justice, the followers of the Dera perceive as a slide that led back to the oppression that they had just barely emerged from. She writes that the Dera provided its followers with a drug that was even more potent than religion, faith and security. And when the followers saw their faith and security in danger, they became an army of people willing to kill and spread violence just to save their faith.