January 18, 2022
6NewArticles
Home Peppy Cake Baked As A Tribute To Indian Independence Day Comes At A Cost Of Rs 25 Lakh 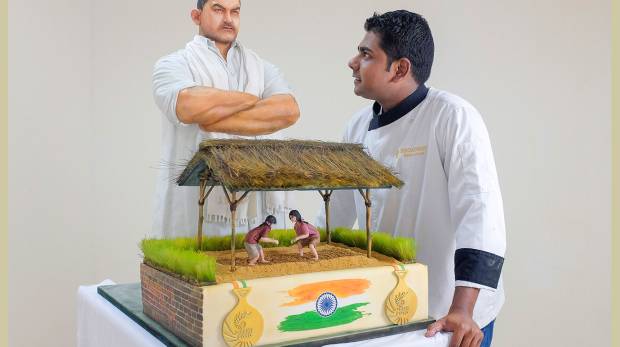 India is a country that has admirers in almost every corner of the world. Many are immigrants to other countries while others are nationals of other countries who admire the culture and beauty of our great nation. There are people paying tribute to India every day all over the world but the most extravagant effort came recently from a bakery in Dubai. The city of Dubai is known for its lavish lifestyle and Broadway Bakery made a cake that is meant to be a tribute to India’s 70th Independence Day.

The cake weighs a whopping 54 kg and took 1,200 man hours to bake. The cost of the cake came around $40,000 and it portrays a scene out of the movie Dangal, Bollywood’s Blockbuster starring Aamir Khan as MahavirPhogat. The artists made the cake showing MahavirPhogat watching over his girls practicing wrestling under a thatched roof. The base of the cake also shows the Indian flag and the medals that GeetaPhogat received at the Commonwealth Games in 2010. The bakery said that the cake could easily be served to around 240 guests and is 100% edible.

Broadway Bakery filmed the entire baking process and also included snippets from the movie. They posted the video on Facebook telling everyone that their client had requested the cake to be incorporated generously with gold. The bakers included 75 gm of edible gold into the cake. The bakers talked about the ingredients of the cake in detail saying that the cake included sugar fondant, the signature chocolate sponge, ganache, Belgian chocolate, demerara sugar and edible gold. The Signature Chocolate cake is one of the best gourmets that is available in Dubai and clearly, all the materials used were of the best quality and no expense was spared.

Forbes magazine states that Dangal became the first Indian movie to earn Rs 2000 crore worldwide and the theme was so chosen to display India’s growing significance in the world.