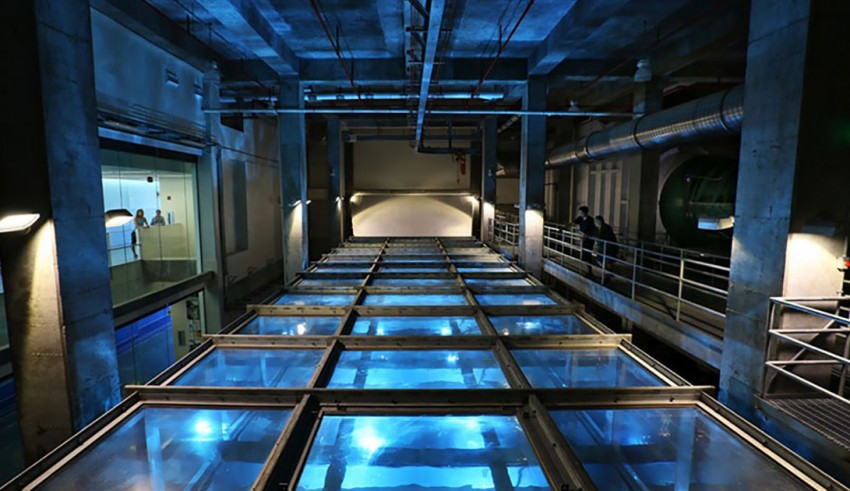 A category 5 hurricane called Dorian is brewing in the Atlantic Ocean for the past several days. But weather forecasters are unable to predict its exact path.

According to The National Hurricane Center, hurricane Dorian is expected to touch the lands of Bahamas on this Sunday. It will reach the eastern coast of Florida as a category 4 hurricane on the following day.

To study hurricanes and to find answers to all such questions, they have made an acrylic tank about 75 feet long at the University of Miami Rosenstiel School of Marine and Atmospheric Science. They have made a machine worth $15 million, which can mimic the conditions of a category 5 hurricane.

According to the director of the laboratory, Brian Haus, this is the world’s largest hurricane simulator. It will help them to understand hurricanes and predict them better in the future.

This simulator tank is created to house a hurricane so that experts can study the nature of hurricanes. The tank is 72 feet long and 20 feet wide. It has a surface area of 4200 square feet, and it is 6.5 feet deep. This makes it the largest hurricane simulator in the world.

The machines simulate a hurricane with the help of a wind tunnel, and a wave makes that can mimic the movement of waves in oceans.

Hurricane simulation is the study of waves and wind and how they interact. The wave basin and the wind tunnel are the two most important components of the machine. Together they can simulate random conditions to create a hurricane or storm. There is nothing to worry about, as this is a man made hurricane in a controlled environment. So if you are thinking, it is capable of causing damage, then you are wrong.

The wave basin is big enough to hold around 40,000 gallons of water. With the help of 12 huge underwater paddles, the water is churned to prompt a storm.

On the other hand, the wind tunnel is designed to pull in air from a giant fan that is powered by a 1,460 horsepower engine. The turbines can be really loud, and therefore, researchers are required to wear headphones. With the help of computer models, researchers can study the patterns and the behavior of the hurricane. Starting from the way it is formed to its direction, everything is studied by the researchers.

How is this hurricane simulation tank helpful for the researchers?

As already mentioned above, this huge simulation tank is built to study hurricanes. It is designed to create a manmade hurricane, which will then be studied by the researchers to know more about hurricanes. From studying hurricanes, they can learn the following things.

Over the years, the researchers have put in great effort to improve the simulation tank model. However, they haven’t been able to improve much, even in the past 20 years.

The main advantage of this simulation tank is that it allows you to create a storm whenever you want. But in reality, you have to face the real beast which you have no control over.

The entire thing is practiced inside a controlled environment. Therefore, there is nothing to worry about.

Although, the real-life condition is hazardous than what can be observed inside the tank. But it still helps the researchers get an idea of how much damage a hurricane can cost.

From the above pointers, it is clear that this simulation tank is made to help the researchers understand the formation and nature of hurricanes. There is no doubt that this is a useful invention as it is meant for the good cause. By studying hurricanes, experts will be able to predict them better. This will help them to save millions of lives that may fall prey to such hurricanes. However, they have a long way to go before they can make a more realistic simulation model. The progress is still on, and hopefully, they will be able to do better in the coming years.

Hurricanes are like uninvited guests. They come and create chaos. Therefore, being able to predict their arrival is always beneficial. This is the main reason behind such a significant investment like this simulation tank. Researchers are currently trying to study the nature of a category 5 hurricane.