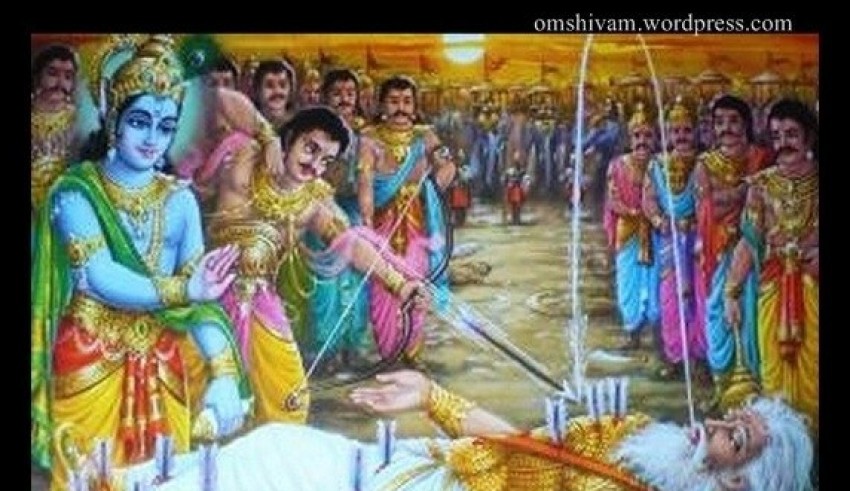 He was trained by the best of the Teachers in the universe to be the King of Hastinapur and establish the rule of Dharma. He stayed away from his father for 14 years to get trained so that he may take over the reins from him. But destiny had something else in its mind for him.

Devavrat or Bhishma( as he is popularly known), son of Ganga & Shantanu had all in him to be the King of Hastinapur and give it’s people a rule which they deserved. But the events turned in such a fashion that the one who was destined to provide the best of the rule became part of events which led to the biggest bloodbath in the history and eventually the downfall of the kingdom.

Whenever a King gives a higher precedence to his pleasures over the Kingdom and his people, the Kingdom is ought to fall.

Shantanu was besotted with Matsyagandha or Satyavati (as she came to be known later ) and in order to make his father happy, Devavrata took a very tough oath of remaining celibate throughout his life. He thought that he was doing his Dharma as a son but he forgot that as a future ruler, his Dharma was to act in the best of the interest of his people. HE FAILED !!

He threw away his kingdom carelessly without a thought either for the kingdom or its subjects. He took that insane vow forgetting that a King owes his allegiance first to the throne & to his subjects and not to his family. In order to make his father happy, he gave up his promise to the citizens of Hastinapur! HE FAILED HIS DHARMA as a Crown Prince !!

He abducted Amba, Ambika & Ambalika to wed them with the undeserving & sick sons of Shantanu & Satyawati. He did this knowingly that whatever he was doing was not right. Proxies are not sent to take part in Swayamvars. Yet he went against Dharma & failed it !!

When Pandu died, instead of stepping up and taking charge he chose to hide behind the blind Dhritarashtra and let Hastinapur be ruled by an unfit & unjust King – a King who thought that he had been shortchanged in life; a King who was blindly in love with over ambitious and greedy son. The people of Hastinapur were again left in wrong hands.

He had all the powers and knowledge to keep Duryodhana in check and be fair to Pandavas but he chose to be silent and hide between Dharma and let events take their own course.Pandavas were cheated during the game of Dices but he kept silent.Draupadi was molested by Dushasana but he helplessly kept on watching and as an elder did nothing to stop the Kauravas. They were sent to exile – he did not use his power to stop this disaster from happening.

His weak leadership and his rigid knowledge about Dharma led to brothers being pitched against each other in the bloodiest war in history.

His entire life is a classic example of lost identity. Somebody else wrote his destiny and he meekly followed it without trying to alter the course. He just went ahead confirming to other’s wishes.His entire life was full of regret, remorse, punishments & no self-satisfaction.

In his earnest endeavor to follow Dharma, he forgot that Dharma is subtle and the Man practicing true Dharma must know which wrong can be a right and which right can be wrong. !!

History would have been very different if just for once He took a decision prioritizing the Kingdom and his subjects. Modern-day Leaders should take a lesson from his life and think twice before taking any important decision which pertains to their country or company.