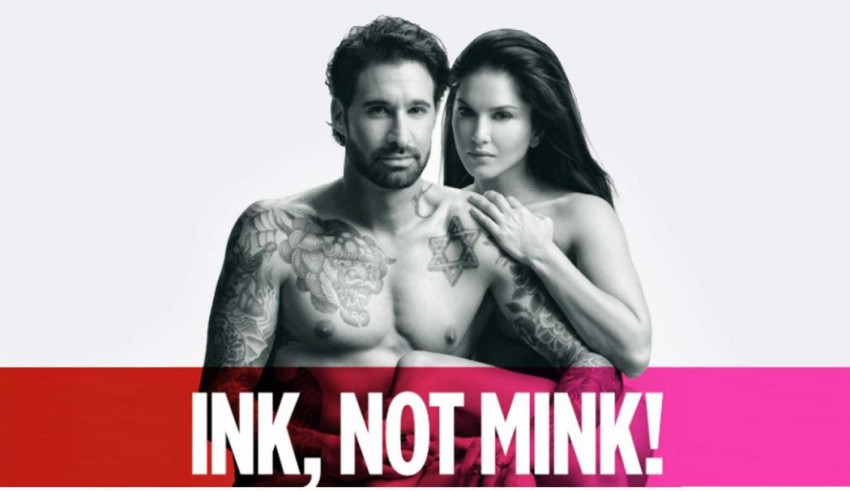 With great power comes great responsibility. A slightly modified version of that quote can be with great fame comes great responsibility. We see celebrities endorsing various humanitarian causes as well as causes for the conservation of nature. Sunny Leone has been actively involved with PETA for dog-cat sterilization and pro-vegetarianism. This time, however, she was joined in by her husband Daniel Weber for the ‘Ink, Not Mink!’ campaign of PETA, one of the most iconic campaigns that PETA runs in collaborations with celebrities. Both the celebrities stripped naked for the photoshoot and Daniel Weber’s tattoos were coincidently well-suited for the name of the campaign.

This was not Sunny Leone’s first rodeo when it came to a bold campaign for PETA. In 2016, she had stripped down to nothing and lain on a bed of red chillies for the Go Vegetarian campaign which left the world baffled. Apart from being involved with PETA, Sunny Leone has also raised funds for cancer patients and raised awareness for women empowerment. Leone talked to the press and said, “We live in a world with such amazing advances in vegan materials and options for everyone. There is no reason for anyone to support cruelty in any form. Synthetic leather, mock croc, and even faux fur are some of the many great options.”

PETA has been running this campaign for a long time now and there are many celebrities endorsing the campaign. The list for these celebrities is a long one but among them some of the notable names are New York Knicks player, Amar’E Stoudemire, rapper Waka Flocka Flame, and the late singer Chester Bennington. The “Ink, Not Mink” was a sister campaign to the “I’d rather go naked than wear fur” campaign by PETA. While the latter was primarily focused on the female bodies, the former draws attention from the bodies of more often than not, racialized male bodies.