February 05, 2023
6NewArticles
Home Sports Do You Know Who Is The Richest Sportsman In The World? Read The Article To Find Out 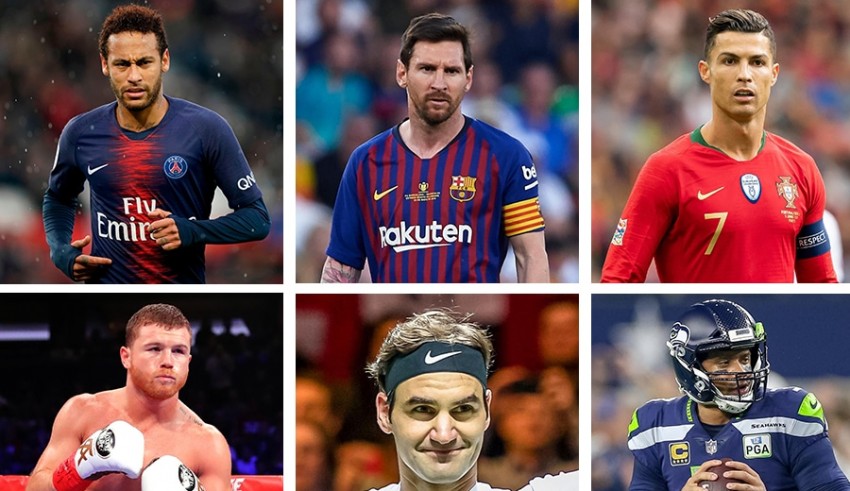 Sports and games are not just a way to keep fit but also to make wealth. If you are good at your game then you can be part of the richest sportsmen list in the world. Here we have the top 15 sportsmen who are the richest in the world starting from 15th.

At 15th place is Neymar Jr, with a $95.5million net worth. He along with Messi and Suarez made the best trio in football for Barcelona. After having played for 4 years with Barcelona and having scored nearly 68 goals in more than 120 matches, he has currently signed up with Paris Saint-Germain of France at a whopping 222 million Euros.

It was in 2009 when he started playing for the national younger team and then moved to the senior team the next year. With 60 goals for the country, he has the third-highest number of goals. He has also been the recipient of many awards like FIFA World Cup Bronze Boot, UEFA Team of the Year, and FIFA FIFPro World XI.

With a net worth of $120 million Conor McGregor, stands in 14th place. He won two titles in two different weight divisions at the same time which created history in MMA Boxing. He also holds the record for the fastest win when he defeated Jose Aldo in just 13 seconds. With 21 titles, he started his career in the year 2017 and faced defeat at the hands of Floyd Mayweather.

With $130 million net worth, Stephen Curry from the Golden State Warriors takes 13th place. He started in the year 2009 and has won three championships with the same team since the year 2015. He was also awarded the gold medal twice, at the FIBA World cup in 2010 and 2014. He also won the MVP in NBA twice and stands third in the list of all-time three-pointers in the history of the NBA.

The captain of the Argentina football team and that of the Barcelona football club, Lionel Messi, touted among the best footballers of the current era has a net worth of $400 million and stands at 12th place. He holds the record for the maximum number of goals in La Liga, about 404 to his credit. He is also the person to make 8 hat-tricks in the Champions League of UEFA. His many records include 670 senior goals, 404 goals in 439 matches for Barcelona, 5 times winner of Ballon d’Or of which 4 times were consecutive, named the FIFA World Player, and more. He has more than 35 awards to his credit so far.

The renowned tennis player from Switzerland ranked at no.6 in the world for his game and a winner of 20 Grand Slams, Roger Federer’s net worth is $450 million. He has 5 consecutive titles in the US Open, 1 French Open title, 6 titles in the Australian Open, and 8 of Wimbledon to his credit. He has also won the ITF championship and ATP player of the year award 5 times and is the only player to win the award for the BBC Overseas Sports Personality of the Year 4 times. A winner of gold in 2008 and silver in the 2012 Olympics, he is ranked at number 11 on the top richest sportsmen list.

With $460 million, Cristiano Ronaldo is the richest of the footballers and is also the top scorer in the UEFA Champions League. It was with Sporting CP in 2002-03 when his career came into the spotlight. He has played for three clubs since his early career days, for 6 years with Manchester United and for 9 years with Real Madrid. Even at the age of 34, he is the best scorer and is also the top scorer with 85 goals for Portugal.

With $475 million, the team boss of Motorsport who was also a former car racer from Ireland, Eddie Jordan is the 9th richest sportsman in the world. He won Irish Kart Championship in 1971 and then later joined the Formula Ford in 1974. He then moved to the McLaren group after three years and later also formed a team of his own. After about 15 years from 1991-2005, this team was sold to the Midland Group at a price of $50-$90 million.

The beloved NBA star player and the professional basketballer LeBron James is at 8th place with a net worth of about $480 million. He started with Cleveland Cavaliers in 2003 and was with them for 7 years. He then moved over to the Miami Heat team in 2010 and rejoined Cleveland Cavaliers again in 2018. He has endorsements which bring around about $50 million a year in earnings. Along with many awards, he has also won the NBA MVP and NBA championships many times over the years. He also received gold in the Olympics in years 2008 and 2012 along with a bronze in the 2004 Olympic Games.

LeBron James currently owns a media company, a production company, a wellness company, and even a pizza franchise.

With a net worth of $600 million the quarterback of the American football team, Roger Staubach is on the list next. He played for ten years with the Dallas Cowboys with whom he joined in the year 1969. The team won both VI and XII Super Bowls when he was in the team. Post his retirement he founded the Staubach Company, dealing in commercial real estate. The company collaborated with AT&T, McDonald’s, and K-Mart Corporation and had nearly 1100 people working across 50 offices in 2008. The company was later sold at $613 million to Jones Lang LaSalle.

Being a Formula 1 winner 7 times, this retired car racer from Germany has a net worth of about $600 million to his credit and is ranked 5th. He has been part of Mercedes, Ferrari, Benetton, and Jordan Grand Prix and won 5 of his championships consecutively. It was in 2006 June, when he retired after he finished up as the runner up to Fernando Alonso of Renault. He again came back with Mercedes in the year 2010 but retired again in 2012. As part of the UNESCO, he is involved in many humanitarian efforts.

With a net worth of $600 million and ranked 4th, Magic Johnson started out with Los Angeles Lakers and played for 13 years with them. Apart from making about $25 million in salary and more by means of endorsements, this player retired from basketball in 1996. His company, the Magic John Enterprises is currently valued at more than $1billion and he has business interests in promotional marketing, movie studios, and also movie theatres which adds up to his net worth.

At a net worth of $800 million, the most successful golfers of all times, Tiger Woods is at number 3. With earnings amounting to $120 million in his career, he was in the first place for nearly 683 weeks until 2014 May. He has won the PGA Tour 80 times, second only to the famous Sam Snead who has 82 wins. He is the only golfer to have crossed a $100 million earning mark in his career and has won as much as 14 trophies.

This Romanian professional tennis player is not known to many but he has won 22 titles and was at 19th rank during his career days. He was also the coach of famous players like Boris Becker and Ilie Nastase. The Tiriac Group owned by him invests in financial and real estate industries. Ion Tiriac is a billionaire valued at $1.2 billion and has several companies like Tiriac Auto, Allianz-Tiriac, HVB Tiriac Bank, Tiriac Holdings, Tir Travel, and more.

On top of the list is the evergreen basketball player Michael Jordan with a net worth of $2.2 billion. His achievements are endless and he has won many awards including the NBA MVP finals 6 times, NBA Championship 6 times, and NBA All start award 14 times and more. He has an average of 30 points per game and has more than 30000 points to his credit. His statistics with nearly 6600 rebounds and 5600 assists are among the best. He has won gold at both the 1984 Olympics and 1992 Olympics. He also won the Gold in the 1983 Pan American Championship and 1992 FIBA American Championship.