August 17, 2022
6NewArticles
Home Lifestyle Visiting These 20 Temples In Mathura And Vrindavan Might Be Your Road To Salvation 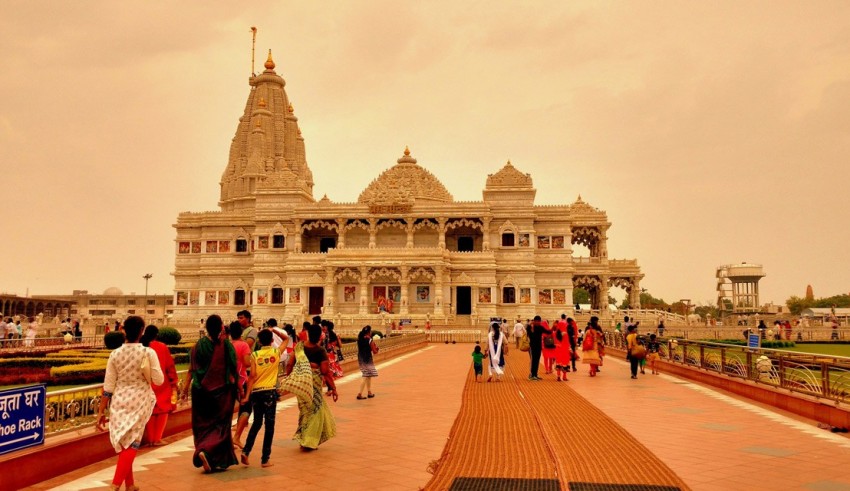 Places To Visit In Mathura And Vrindavan

Mathura and Vrindavan can collectively be called ‘The land of temples’. The birthplaces of Lord Krishna and Radha, there are more temples here than in any other place in the world. Being one of the holiest sites for Hindus, a visit to these two cities in Uttar Pradesh India might be your ultimate road to heaven. Following are ”20 Famous Temples To Visit  In Mathura Vrindavan”

Located in Mathura, Uttar Pradesh, this Shrine is believed to be the actual birthplace of Lord Krishna and is one of the holiest pilgrimages for Hindus. The temple complex is believed to be made on the prison cell where Lord Krishna was born while his parents were being held captive by his maternal uncle on account of a prophecy.

It is another holy pilgrimage site located along the banks of the Yamuna river. It is well known for its ‘Jhoola’ where Lord Krishna’s idol is decorated and placed on a swing.

According to the legend, this is the hill that Lord Krishna lifted to shelter the people from rain and flood. Now it is a sandstone hill approximately situated 20 km from Mathura.

Built by Jugal Kishore Birla for his parents, this temple has 18 Chapters of the Bhagwat Gita inscribed on its pillars. These contain the Chapters during the Mahabharata where Lord Krishna gave his teachings to Arjun.

Located between Mathura and Vrindavan, it is an important site as according to legends, the hair of Deity Jagdamba fell at this place and also Guru Gorakhnath attained enlightenment at this place.

Built in the respect and memory of Baba Jai Gurudev, this temple is lush white temple often described as similar to Taj Mahal in appearance.

Situated adjacent to the Krishna Janambhoomi Complex, it is the home to the first deity that was placed by Shri Badrinath. This temple is also known as Krishna Janmasthan. It is one of the most ancient temples in Mathura, Uttar Pradesh. The current one was built in the 1960’s with a number of idols of ‘Radha Krishna’

It is regarded as the birthplace of Radha Rani and is situated in Barsana on Bhanugarh hill. The temple conducts an extravagant function for Holi where traditional ‘Lathmar Holi’ is played.

It is one of the most visited temples dedicated to Lord Krishna situated in Vrindavan. Banke means bent at three places which denote the idol holding a flute and standing in a cross-legged fold. ‘Bihari’ refers to supreme enjoyer.

Built and maintained by Jagatguru Kripalu Maharaj Trust, this temple is a huge beautiful complex dedicated to Lord Krishna and Sita Ram. Colored lights projected on the temple creates a great mesmerizing effect.

It is a temple in Vrindavan which is majorly surrounded by bushy forests. It is believed that every evening after the aarti, Lord Krishna comes here to perform a Maha Raasleela which if watched by someone, makes them go blind.

The largest temple in Vrindavan, this temple is dedicated to Lord Ranganatha. This temple imposes restrictions on Non-Hindu and Non-Indian visitors allowing them the access only to the compound.

It is a temple built by the International Society for Krishna Consciousness (ISKCON) and is one of their most important temples in India. It is beautifully constructed with lots of Radha Krishna idols all around the complex.

It is a shrine in Vrindavan originally believed to be built by Ray Singh Of Bikaner in 1632 but later destroyed by Aurangzeb and rebuilt thereafter in 1819.

Similar to Gopi Nath temple, this temple was also destroyed by Aurangzeb but was shifted to Rajasthan. It was rebuilt in the present days to follow the religious aura of the place.

Located on the way to Prem Mandir, this temple dedicated to Lord Krishna is designed in a very beautiful way depicting it to be emerging out of a lotus. It contains various small manmade lakes and fountains.

This temple is situated in Vrindavan built in the year 1542. This temple is the home to the original Shaligram deity of Lord Krishna and Radha.

It is one of the oldest standing structures in Vrindavan being built in the year 1580. Dedicated to Lord Krishna, this temple is now in its ruins but provides a connection to the holiness of the place.

It was built by a wealthy merchant from Lucknow named Shah Kundan Lal. It is one of the most popular places in Vrindavan. The enormous temple has 15 feet high pillars with paintings of Radha-Krishna with glass chandeliers.

Situated on the banks of Yamuna in Vrindavan, this sandstone made temple is quite a spectacle to watch. It is home to Kesi Ghat where ceremonial bathing is done.