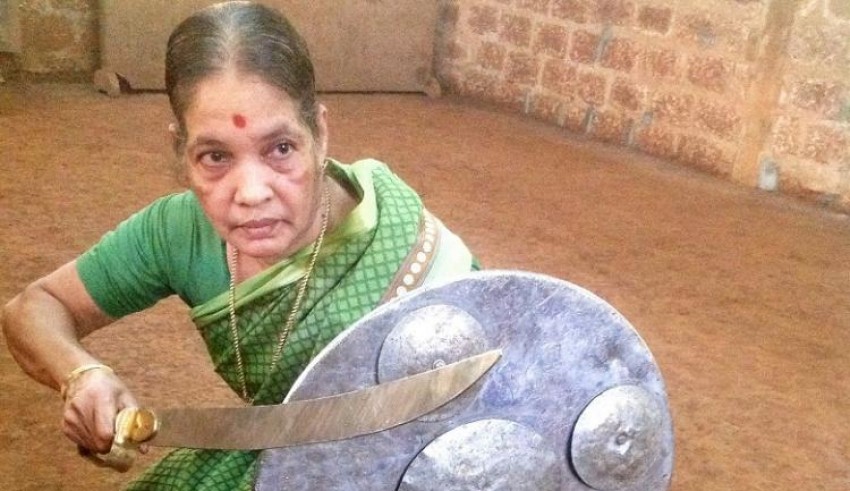 Meenakshi Raghavan Gurukkal may be in character for the duel, but it’s almost as if she doesn’t want the onlookers to forget who she is and hence, what it has taken for her to get there, when she walks out into the arena with just a hint of a smile, wielding a convivial yet ominous expression. Her choice of costume? A sari, which she handles with the poise of a tigress. However, her ornaments, leave no room for ambiguity, a shield and sword in place of bangles. As she swallows whole a man half her age and in the prime of his life, the context has been set for this revelatory rendezvous.

Arguably the oldest female practitioner of Kalaripayattu, an ancient martial art form that originated in south-west Kerala, Meenakshi Raghavan is only getting more formidable as the years pass. Respectfully addressed as Meenakshi Gurukkal or Meenakshi Amma, she has mastered the art of using swords and sticks in this almost dance-like form of self-defense.

Kalaripayattu has seen its share of timely flickers in interest levels from its patrons, who are mainly spread across South India, but Meenakshi Amma has sworn by it devotedly for a staggering 68 years. Today, she teaches 150 students at her school Kadathanadan Kalari Sangam in her locality in Vatakara, which falls in Kozhikode in the state of Kerala. But she still remembers vividly when she first walked through those doors as a confused albeit excited seven-year-old, clasping the hands of her father and waiting to see what the room had in store for her.

Meenakshi Amma remembers the old days, “I was first taken to Kalari (meaning ‘arena’) by my father, Mr Damu, at the age of seven. I used to practise dance in those days and that was one of the reasons for me joining the Kalari as it increases flexibility in movements. Later on, my guru, Mr V P Raghavan Gurukkal started training me in Kalari.” She also says, “Currently, I am 73, and still practising Kalari. I consider myself a strong woman and will move forward, facing whatever challenge comes my way. My children are all very supportive, and that’s my confidence. Health-wise by God’s grace I am good, and praying to God to keep me healthier so that I can train more students.”