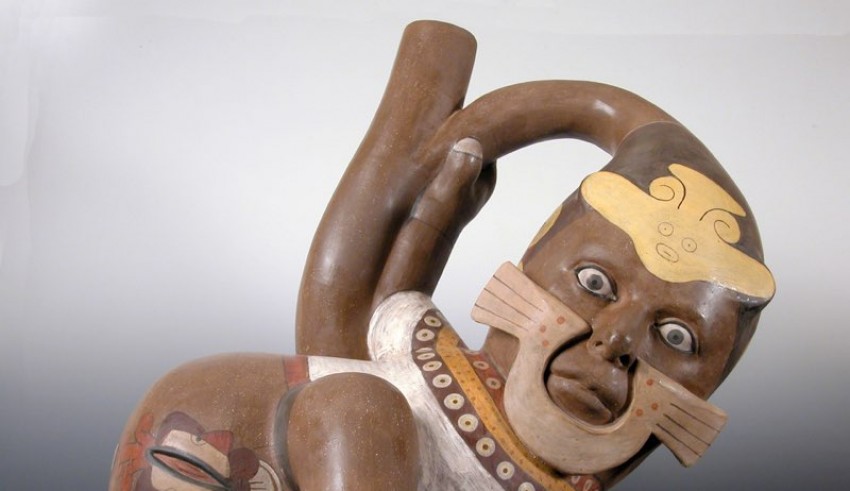 Kukuli Velarde is a Peruvian-born, Philadelphia-based artist who co-opts the forms of pre-Columbian ceramics to issue a postcolonial manifesto about identity and integrity. “Plunder Me, Baby,” her show at the American Museum of Ceramic Art in Pomona, is withering one moment, wacky the next, and brilliant throughout. The show features two series of sculptures, a mixed-media wall piece and a selection of videos. It is also smartly augmented by examples of the kind of pre-Columbian ceramics that Velarde riffs on, small effigy urns and spouted vessels with human or animal attributes and geometric patterning. When it comes to satire, Kukuli Velarde’s work is both outrageous and outraged at the same time.

Kukuli Velarde’s versions of the pre-Columbian urns and vessels are scaled up, amped up, sexed up. Velarde has inserted her own likeness where a more generalized human face or animal head would appear in her centuries-old models. In doing so, she asserts continuity with her indigenous roots and kicks back defiantly at the forces that oppressed, mischaracterized and dehumanized her ancestors. One figure, with a patterned skin of dusty gold, teal, emerald and crimson, appears seized with fright, eyes and mouth agape. In another, Velarde affixes her watchful face to the body of a dog, leg raised, interrupted mid-lick. A terracotta figure sticks her tongue out petulantly from a face painted blood red, while two unruly dogs squirm on her lap.

Velarde makes serious sport of the derogatory traits assigned to her forebears, exaggerating displays of fear or passivity, roughness or disobedience. She sculpts with the vengeance of self-determination. Each of these temporal mash-ups has taut energy, biting wit and a long, complex title starting with a slur in Quechua, some mocking descriptions in English and Spanish, and the date and culture of the particular piece that served as the artist’s springboard: Maya, 750 BC, for instance, or Zapoteca, AD 300/700.