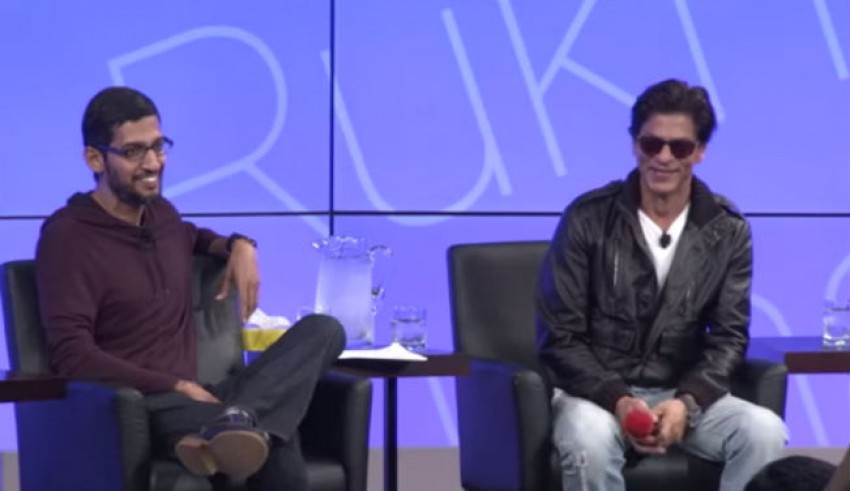 Everyone knows Shah Rukh Khan. He is one of the most recognized Bollywood actors across the world. Another famous personality in the world is the CEO of Google, Sundar Pichai, Indian-born tech-genius who climbed up the ladder of success. According to the Hindi film industry, Sundar Pichai will be seen on Shah Rukh Khans TV show “TED Talks India Nayi Soch”.

According to a statement, Sundar Pichai will be appearing on the upcoming episode, titled “Tomorrow’s World” through video conference. Pichai believes that he gained his much-known reputation across the world through Shah Rukh Khan when he did an interview with King Khan for his film ‘Happy New Year’ back in 2014.

“Bollywood is globally famous. Everyone knows Shah Rukh, but people started to know me after my interview with him in 2014 for his film ‘Happy New Year’. I must say his job is really cool, but he’s cooler,” Pichai said. The Google Chief said that he aims to empower every Indian with access to internet connectivity and smartphones through a programme called the ‘Internet Saathi’.

“Slow down, take time to think about what you want to do from your heart,” he said. Internet Saathi is a Google initiative in partnership with Tata Trust, a digital literacy programme, in which Google aims to bridge the online gender divide in rural India.

On its website, Google says, “Even as the world becomes increasingly connected, rural India is witnessing a widening online gender gap — only one in ten internet users is a woman. Google is committed to bridging this divide.

Through our Internet Saathi initiative, women ambassadors will train and educate women across 300,000 villages on the benefits of the internet in their day-to-day life.” The episode starring Sundar Pichai in the video conference will air on Sunday on the Star Plus show the “Tomorrow’s World”.