August 17, 2022
6NewArticles
Home Peppy Story Behind The Picture Of The Frog That Swallowed A Snake 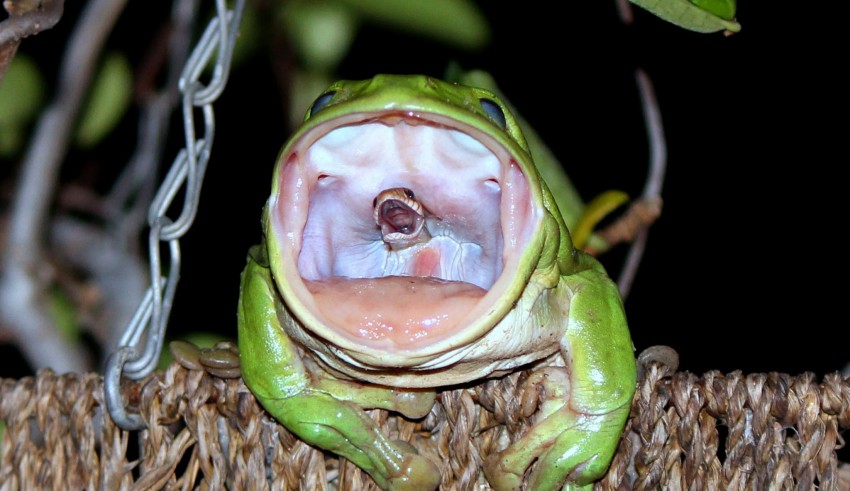 The picture of a frog swallowing a snake has become quite popular on various social platforms. However, the story behind the shot and its photographer has always remained a mystery. Until now, that is. We often observe that before any storm, the environment is rich with sounds and sights of creatures. The same happens in North Queensland in Australia just before any storm.

Julie-Anne O’Neill is an Australian photographer who captured the shot of the frog swallowing the snake back in 2011. In 2011, O’Neill was taking a late evening walk on one such night. She was carrying a large flashlight called a dolphin torch with which she hoped to observe how the local wildlife reacted to the coming storm when she came across what she describes as the largest Australian green tree frog she had ever seen. “It opened its mouth, and I thought ‘Oh my gosh; what the heck!'” she remembers.

In the frog’s mouth, a small brown snake was sliding backward down the amphibian’s gullet. The snake was still holding on to dear life and frantically trying to slither back out. Initially, she was stunned by the sight, but then she remembered the new digital camera she had bought for just such a moment.

O’Neill claims she wasn’t trying to be a photographer for photography’s sake. Instead, she wanted to document some of the stranger things she had been seeing in the wild. Once back outside with her camera in tow, she found the tree frog had climbed up a wicker basket and was perched on the edge. It took her several attempts to get a clear shot but she did and felt victorious.

At the time, O’Neill was convinced the frog was going to die. Puncture wounds dotted the frog’s tongue and, with the snake still viciously wriggling. But in the morning, the frog was still there. She posted the photo on Google+ in 2011 and hoped that it would gain attention, but it did not pan out as she had desired.

However, she didn’t expect the massive following it eventually accumulated on various social websites, Reddit chief among them. While she says the attention has been overwhelming, she’s happy people are enjoying the photo as much as she has and that she’s finally getting her credit.