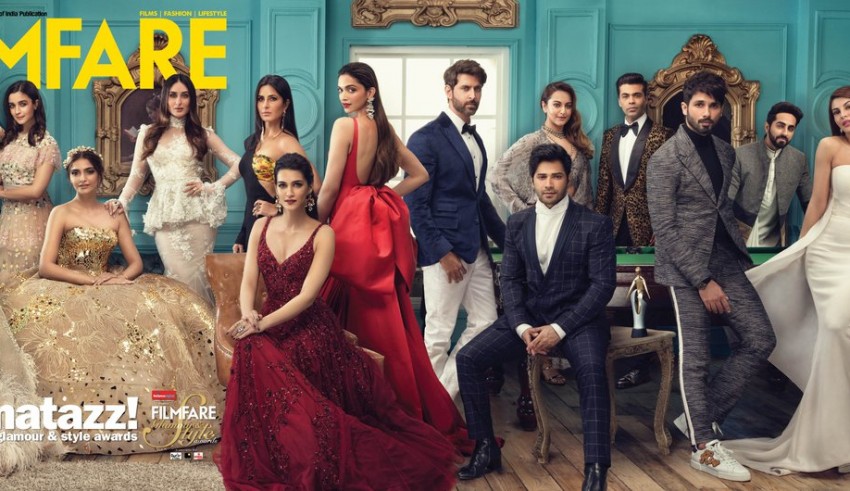 Filmfare magazine has decided to start off their year on a rather glamorous note. Their January cover is all set to feature the boss ladies of Bollywood. Kareena Kapoor Khan, Alia Bhatt, Sridevi Boney Kapoor, and Sonam Kapoor will grace the cover of the January edition of Filmfare magazine. The ladies are striking a rather dominating pose in front of a vintage backdrop. The cover shot features the winners from The Filmfare style and Glamour Awards. The cover is titled Razzmatazz and has all the ladies looking their glamorous best.

Sridevi Boney Kapoor is standing in the forefront of the cover, in a Zaid Nakad outfit. Winner of the Timeless Glamour and Style Icon Award, Sridevi included a nude beaded gown by Ziad Nakad Couture with feathered detail on the sleeves and the hem of the gown. The look was completed with an embellished clutch, earrings, and a ring by Farah Khan Ali and simple makeup.

Right behind Sridevi, Alia Bhatt is seen wearing a beautiful Needle and Thread dress. Winner of the Best Dressed (Female) Award at the Filmfare Glamour and Style Awards, her pink lace maxi dress with dainty floral embroidery was coupled with minimal makeup and simple hair.

Sonam Kapoor is seen sitting on the cover shot. Winner of the Most Stylish Star (Female) Award, Sonam Kapoor looked nothing less than a princess in a strapless gold gown by Atelier Zuhra, a Dubai based brand. Her gown had a gold embellished bodice which opened into a full lace ball gown skirt with gold appliques. The look was completed with gold tinted eye makeup and her hair in an updo and finally a gold headband.

The last but not the lease was Kareena Kapoor Khan who struck a pose while resting one hand on Sonam Kapoor. Winner of the Trendsetter of the Year Award, Kareena Kapoor wore a white lace gown from Galia Lahav’s latest bridal collection. The long sleeve, peplum waist gown was accessorized with a pair of earrings, center parted cascading curls and a warm lip colour.