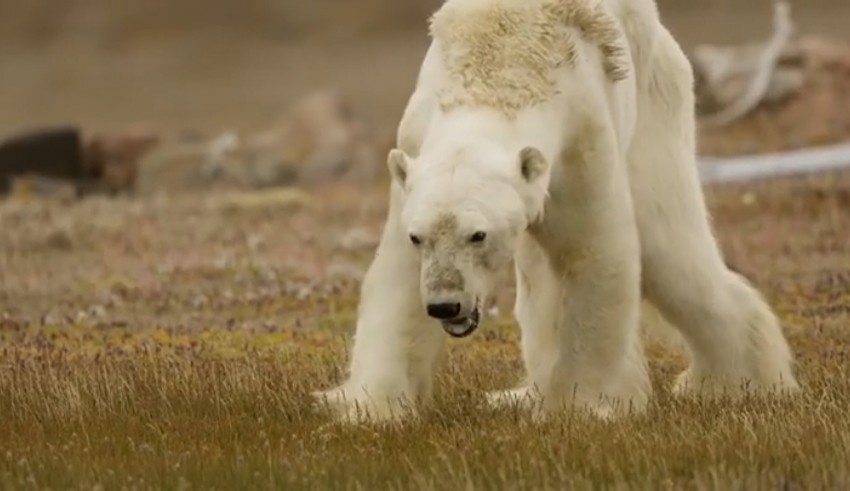 Death is one of the most heart-breaking moments to witness. What is worse than a normal death is the death of a helpless creature. Photographer Paul Nicklen and a team of filmmakers from a conservation group called Sea Legacy arrived on Baffin Island late summer and witnessed a horrific and heart-wrenching sight- a helpless and starving polar bear desperately clinging on to life. “We stood there crying—filming with tears rolling down our cheeks,” Paul Nicklen said. The video shows the polar bear clinging to life, its white hair limply covering its thin, bony frame. One of the bear’s back legs drags behind it as it walks, likely due to muscle atrophy. Looking for food, the polar bear slowly rummages through a nearby trashcan used seasonally by Inuit fishers. It finds nothing and resignedly collapses back down onto the ground.

When questioned why he did not come forward to help the bear, Paul Nicklen said, “ it’s not like I walk around with a tranquilizer gun or 400 pounds of seal meat.” Even if he had helped, Nicklen would only be prolonging the bear’s misery, not to mention that feeding wild polar bears is illegal in Canada. “When scientists say bears are going extinct, I want people to realize what it looks like. Bears are going to starve to death,” said Nicklen. “This is what a starving bear looks like.”

The whole story aims at bringing attention to the changing climate that is becoming the root of many problems of today. Polar bears have long been unwitting mascots for the effects of climate change. As animals that live only in Arctic regions, they’re often the first to feel the impacts of warming temperatures and rising seas. The large, half-ton bears find concentrations of seals on sea ice. During summer months, it’s not uncommon for polar bears to go months without eating while they wait for Arctic ice to solidify.