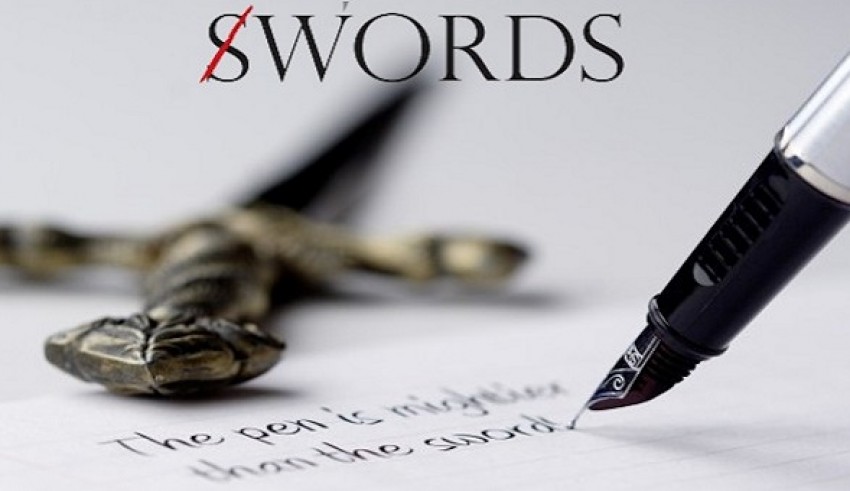 What are words? Words are a meaningful formation of the alphabets to convey our thoughts. In their own-self they are harmless & powerless and they draw their power from the manner they are spoken, the timing, the tonality, the volume & the person who utters them. words spoken in the right context and tone can motivate people to achieve impossible feats and the same words if spoken with sarcasm & anger can cause wars. Our great epics – Mahabharata & Ramayana are solid evidence for the same.

Words are more powerful than weapons and if unleashed in the right manner can cause progress or regress.

I remember of one such incident from the Mahabharata wherein words spoken by Lord Krishna or Kahna or Govinda, as people called him with love, had a deep impact on a person and his feats surprised everyone.

The incident goes back to the time when Krishna killed his maternal uncle Kansa & this angered King Jarasandha. His most trusted Lieutenant & his son in law had been ruthlessly murdered by ordinary cowherds. He could not digest this. His anger was further fueled by the wailing of his two widowed daughters – Asti & Prapti, who lost their husband in their teens. Apart from this personal loss, the murder of Kansa also delivered a Big blow to his power & prestige. The murderers ought to be taught a lesson, he thought & vowed that he would not rest until the time he beheaded both the cowherds – Krishna & Balrama.

On the other side, when Krishna came to know about Jarasandha’s vow and his marching mighty army of Jarasandha, he thought of moving away from Mathura. People might’ve thought that he was fleeing in fear, but the reality was that the army of Mathura was not ready to face the mighty warriors of Jarasandha and thousands would have lost their lives in vain. Krishna planned to save Mathura by distracting Jarasandha and forcing him to change his course and follow him.

Krishna & Balrama, then traveled for many days to reach a hill which was ruled by the Garudas – men who wore masks which made their faces look like eagles. Garudas were a very lively race – they were fleet-footed and extraordinarily agile.They could run up & down the hill, run along dangerous paths, jump over dangerous ravines like mountain goats. Krishna was amazed to see their alacrity & nimbleness.

However, there was a sad story to their clan – the chiefs son Vaitaneya, once a strong Garuda fell ill suffering from high fever. When the fever subsided, his legs got paralyzed and he lost his ability to run around and scale peaks like other Garudas. Whosoever could not take part in the sports activities, was looked down upon as cursed. And Vaitaneya felt highly dejected & demotivated when he was ignored & left in a corner to die his own death. Even his father viewed him with contempt & felt ashamed to have him as his son.

He would rebuke him & curse his fate and complain to Gods for having a disabled son. No matter how hard Vaitaneya tried to rise, he failed and with each passing day, his father’s tone got more acidic and negative. Vaitaneya’s mother tried hard to create a balance between the father & son but she failed.Vaitaneya’s father was the chief of the pack but his son’s ability lowered his position among his people.The everyday bickering & demotivating talks by his father left his spirit dead and many a time he thought of jumping over the cliff to end his life.

Before Krishna arrived, he had heard stories about him and the feats that he had achieved at such a young age. Not sure why, but a sense of hope surged inside him. No one came to meet him these days and he was sure that no one wants their guests to meet him as well. Therefore he dragged himself to where Krishna and Balrama were staying.The path was stony & it was a herculean effort for him to drag himself.

He started in the starry night and by the time he reached near the hut where Krishna was sleeping, it was dawn. His body was badly bruised and there was blood oozing out from all over.Hearing his moaning, Krishna stepped out and by the time he came out, the chief, his wife and a group of Garudas also came searching for the missing Vaitaneya.

Krishna looked lovingly at Vaitaneya and starting cleaning his bruises.Vaitaneya started crying and he fell at the feet of Krishna. Tears started flowing from his eyes and he could not utter even a single word.After a while when he regained composure he spoke to Krishna “ I am a cripple and nobody wants me and I have no one in the world except you “ Everyone around laughed and ridicule him but Krishna patted him with love and affection.

He said, “ I am your’s Vaitaneya, come with me & we will walk together”.Vaitaneya felt even more hurt – he thought Krishna would help him but here he was also making fun of him. He looked at Krishna with eyes full of tears and he saw only pure love and genuine affection for him. Krishna again spoke “Vaitaneya, stand up and come with me. You can walk, your legs are waiting for your command.

Command them and they shall do as per your wish. ” People around were watching this episode with amusement – they looked at Vaitaneya with ridicule and at Krishna with disbelief. What could not happen in so many years, how could that happen now.

Vaitaneya looked at Krishna and then at his weak legs . with all the conviction and strength that he could gather, he closed his eyes and made an effort to stand up. It seemed like a lifetime and the effort equivalent to giving birth to a child and behold to the surprise of everyone, Vaitaneya was able to stand up. It was indeed a miracle. His own father and brothers had given up on him and here comes a stranger who does not ridicule him and on the contrary motivates him.Vaitaneya limped forward and fell to the feet of Krishna and tears started flowing from his eyes washing the lotus feet of his savior.

The entire Garuda clan started praising and thanking Krishna for giving a new life to the son of their leader.

The above episode might have been cut short in narration and it might have taken a lot of efforts and time for Vaitaneya to stand up and walk again.In the interest of time, the author showed it as a miracle whereas in reality it would have taken a huge amount of motivation and push by Krishna. What the entire Garuda clan could not achieve in years, Krishna accomplished it in a short time. Actually, the task was accomplished by Vaitaneya but it was Krishna who showed faith & confidence and motivated Vaitaneya to make all the efforts.

Words by his father and brothers pushed him towards committing suicide and it was words of motivation that pushed him to believe in himself and stand up once again. Words are powerful than any weapon or medicine in the world – use them rightly at the right time with the right intention and you may make miracles happen. Wrongly used, they can create destruction and havoc in the lives of people. The choice is completely your’s !!