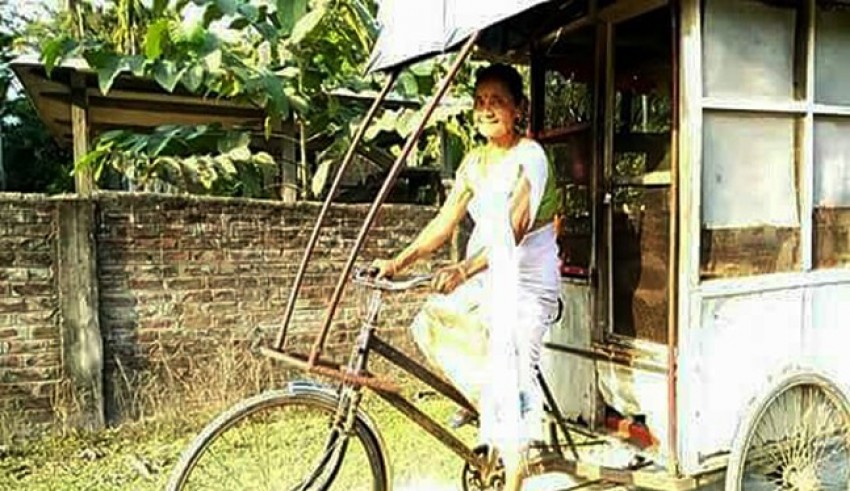 Abraham Lincoln rightly said, “All that I am, or hope to be, I owe to my angel mother.” While he might have said it, the quote applies to every single one of us in the world. Whatever we are, it is due to the great sacrifices that our mother made for us. The story of one such mother came under the spotlight when a Facebook post was shared by Bharatiya Jatiya Congress, Block General Secretary, Jitu Saikia in the Assam Page. Mamoni Das, aged 55, is a single mother of a 16-year old girl who aspires to become a champion in wrestling one day.

Residents of Rajabari village in Bokakhat, Mamoni Das runs a business of paddling a mobile kiosk every day under the blazing sun. She might feel fatigue or tiredness throughout her body, she might be sweating, but she would not stop paddling, the mobile kiosk being the only source of income for the mother and daughter. She was abandoned by her husband in the early years of her marriage, an incident which made life miserable for her and her young daughter. Ever since that day, her only hope has been her daughter, Ruma.

Mamoni Das has been involved in running that kiosk ever since her husband betrayed her and has been striving hard to make sure that her daughter lives a good life. Her hard work every day brings a little more security to her daughter’s dreams. For Mamoni, her daughter is everything. Ruma, a student of class 10, will represent Golaghat district in the upcoming Assam Wrestling Competition in Guwahati,to start from December 27. Mamoni had appealed for help to various places and organizations but none of them came forward to help her. However, Mamoni is helped by two women organisations namely Arohan and Bandhan where they provide her with financial assistance.