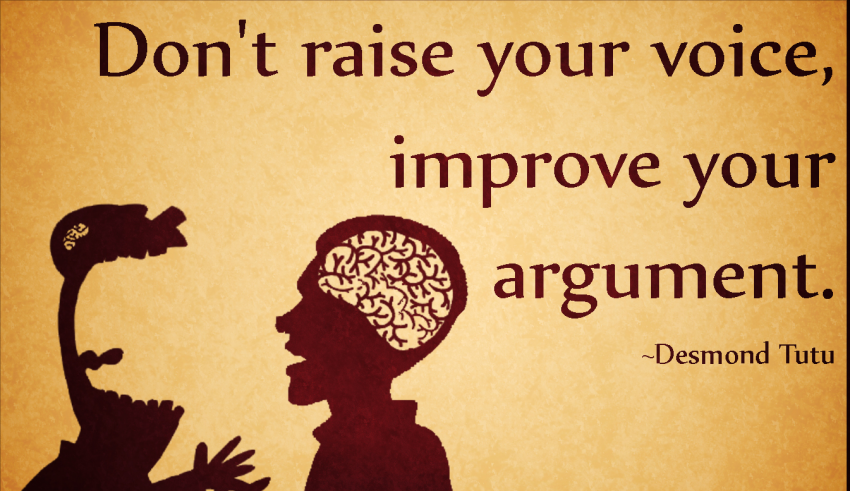 Normally, it is seen that people raise their voice either they are at fault having committed something wrong or they are right on their point but cannot convince the opponent with their logic.

In both the conditions, one waste his time in getting angry even on insignificant, petty or unimportant issues. Most of the time people are so involved in the debate in arguing that they forget even on the subject of arguing.

In fact, we have to live what we believe then why waste time in arguing with others what you believe in.

But when you chose to debate on a certain point and when you raise your voice, it looks as if you are at fault in what you are saying and even if you are speaking the truth, you are still taken as wrong.

This does not mean that any obstacle on this account should stop moving forward as there is always a way to learn from your experiences of the past in front of you.

In every days’ life, one doesn’t gain anything by losing temper with someone while arguing but creates stupidity.  One who has self-control over his stand when the other person is in a temper, ultimately wins at the end? It hardly matters as to how many words, or how long you have spoken loudly, it is only he who has spoken even a single word but with common sense and reasoning.

I recollect that in one of the international level service organizations, one member is designation as tail-twister keeping in view his capability to change the atmosphere with his tit-bit or convincing argument to avoid any untoward incident in the house.  Perhaps with the belief in the words of Robert Mckee – In comedy laughter settles all arguments.

Frankly speaking, it is an admitted fact that when you argue with anger, you may be able to condemn someone but that will not bring any change and light and darkness are the best and living examples.

One should improve his arguments by setting an example with logic so that the others see the light in you instead of being forced to look intently at the darkness in them. So better don’t raise your voice, better improve your arguments.