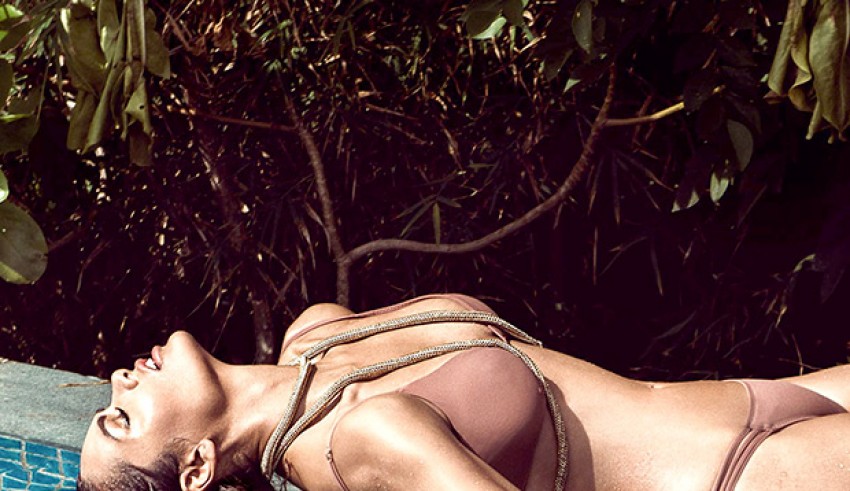 Esha Gupta is a stunning and gorgeous beauty, and one with brains as well. She was all set to become a lawyer before she found her calling in modelling and Bollywood. She has made her presence known among the inner circles of Bollywood with her wit and beauty. Esha Gupta knows how to create thunder and lightning in a storm with her sultry yet sensuous pictures. She has been making headlines recently with her semi-nude and bikini-clad photoshoots which created a havoc on the internet. Yet again, she posed for another photoshoot, this time for the cover of GQ India magazine for the November issue of the magazine.

Esha Gupta shared one of the many pictures from the photoshoot for GQ India on her social media with a caption, ‘November says hello.. #gq’. She flaunts a stunning printed swimsuit by Missoni at Infinite Luxury with a statement necklace by Aurélie Bidermann. The former Miss India has posed for many shots in the photoshoot, all in bikinis and swimsuits. In one of the shots, the siren is gracing a red, high-waist bikini from Arak, pairing it with a Topshop denim jacket. She has accessorized the look with danglers from Maria Black.

In another shot, Esha Gupta showed off her body in a beige Melissa Odabash bikini, pairing it up with a necklace from Cornelia Webb. She also posed as a muse to GQ India in a black bodysuit.

One of the all-time favorite shots from the photoshoot was a shot in which Esha Gupta is wearing a light blue bodysuit by Melissa Odabash, completing the look with simple makeup, beach waves, and cuffs by Hermès. When it comes to work, Esha Gupta was just seen in Milan Luthria’s Baadshaho, alongside Ajay Devgn, Emraan Hashmi, and Ileana D’Cruz. She is also going to be seen in Commando 2, Hera Pheri 3, and Aankhen 2 very soon.