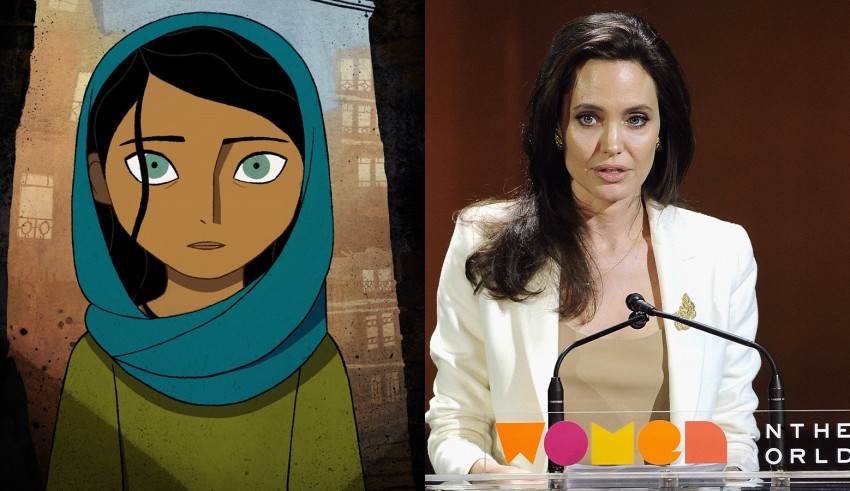 We saw the trailer for ‘The Breadwinner’ back in May and the concept of the movie seemed quite different from the mainstream animation that is released in today’s times. During its U.S. premier at the inaugural Animation is Film Festival in Hollywood, Angelina Jolie introduced the movie as a very important animated movie from GKIDS. The movie is about a young girl living in the Taliban regime who puts on the disguise of a boy because her father gets unjustly arrested and she has to work to support her mother and sister and be the Breadwinner of her house.

Angelina Jolie is the executive producer of The Breadwinner and while introducing the movie, she announced that the movie is a story of our times during which equal rights for women remain a central burning issue. Explaining more about the movie, she said that the movie asks the viewers to put themselves in the shoes of another person, in this case, the other person being an 11 year old girl in Afghanistan. Jolie said that there are still a few countries in the world where it is hard to be a young woman and she urged people not to forget about such countries and its people. By such countries, Angelina was referring to countries like Afghanistan, where women are oppressed and do not enjoy equal rights as men.

The theme of The Breadwinner is love of family, compassion, care, and humanity, and it was discussed into much detail after the screening, which received a standing ovation. Angelina Jolie also drew attention towards the commitment that the filmmakers have put into the movie to make it look so authentic. The movie is directed by Cartoon Saloon’s Nora Twomey. The voice of Parvana, the movie’s protagonist, is given by Saara Chaudry. The movie is based on the young adult novel of the same name, written by Deborah Ellis. The Breadwinner opens in North America on November 17.