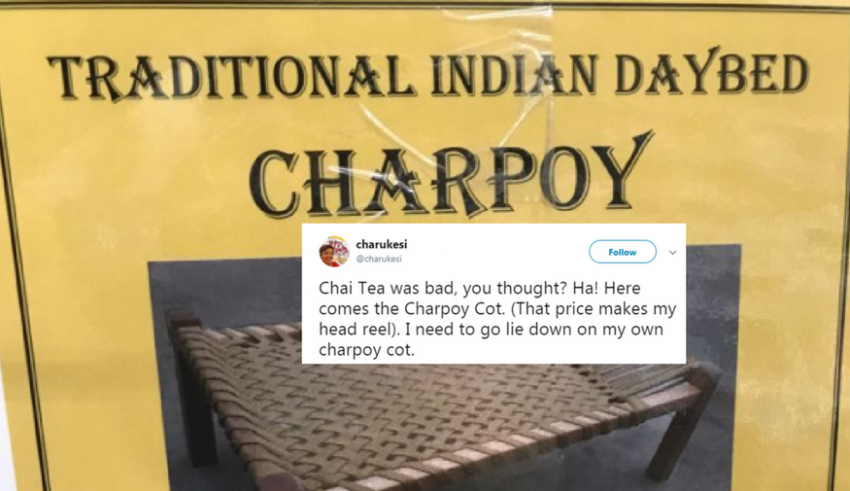 An Advertisement by an Australian Man, Daniel Bloore, of his “Charpoy” is going viral on Twitter. People reacting to the advertisement skill of the Sydney based Daniel, who is selling an Indian traditional Charpoy in the whopping amount of 990$ which is close to 50,000INR.

Here are some of the reactions:

The humble desi manji goes global with all the bells and whistles of western marketing pic.twitter.com/9lZHyd4jJ6

If this is real #Indians can mint money in #Australia selling our old stuff – #Charpoy #CaneFurniture #Mora #ClothesHorses #ClayUtensils … pic.twitter.com/fnRaFuhdcI

While Indians are made to feel ashamed of rural lifestyle, many others have started to appreciate & use "Datun", "Dona" & now "Charpoy". pic.twitter.com/w2k4Wk8nCe

Charpai for $990. We were literally sitting on a gold mine all these years. https://t.co/5uUyL5fadj

Why do we alwyz need gora thappa on our own things 2 b recognized?haldiwala doodh ke baad now khatiya became imported foreign returned 😂😂 https://t.co/gf2h7sYsT3

Chai Tea was bad, you thought? Ha! Here comes the Charpoy Cot. (That price makes my head reel). I need to go lie down on my own charpoy cot. pic.twitter.com/Yw2V5ju96R