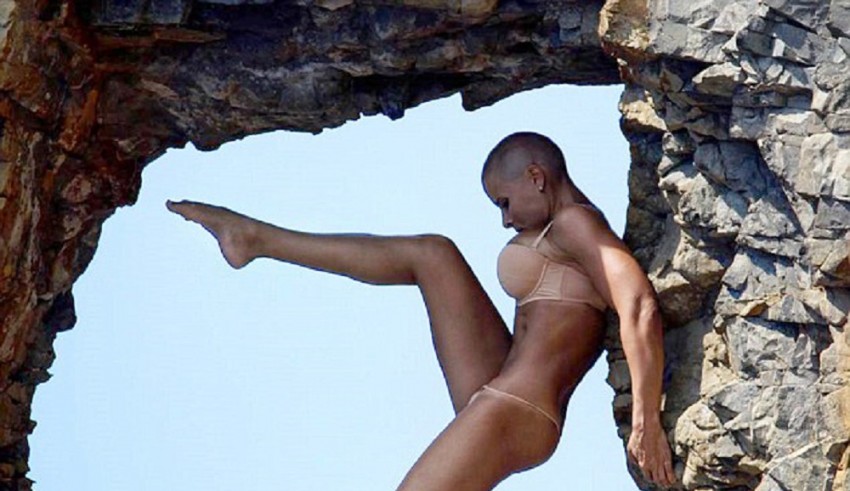 Russian mom and yoga instructor, Marina Vovchenko has become an internet sensation with the world going gaga over her impressive yoga poses.

Marina strips off to perform her amazing yoga poses, taking pictures of her toned and flexible body.

The 34-year-old strips down to bare essentials and performs gravity-defying yoga positions.

She is a mother of three children but her body is toned and well-maintained.

Hailing from Moscow, Marina now has more than 145,000 followers on Instagram.

The fact that the pictures that she has posted on Instagram are kind of revealing and some are even semi-nude has only helped add fuel to the fire of her popularity.

Marina Vovchenko weighs in at an incredible 8 stone (nearly 51 kg) and has a petite body structure at a height of 5 feet 4 inches tall.

She has shown off her strength and flexibility with picturesque locations as the background.

She sports a bald head in all pictures and thick-rimmed glasses in some pictures.

Some of the pictures have gained the status of being quite steamy and have gone viral on the internet.

Her perfect headstands and perfect splits are also among the pictures that have gone viral.

However, she has received much criticism given the semi-nude pictures.

Some on the internet have given their opinion that she should cover her act up since she has a husband and three children.

Marina, however, said in a statement that she is not ashamed of her body and will not be taking a step towards modesty any time soon.

She also said that a woman’s body is the best accessory that she has and one cannot always see it clearly in jeans and dresses.

Marina added that posting semi-nude pictures was the best way to show-off her body.

When asked how her husband reacted to her posting the pictures, she said that her husband does not control what she does and she does not require her husband’s permission to do anything.

She also claimed that her children were quite supportive of her and it did not matter to them if her clothes were off or on.