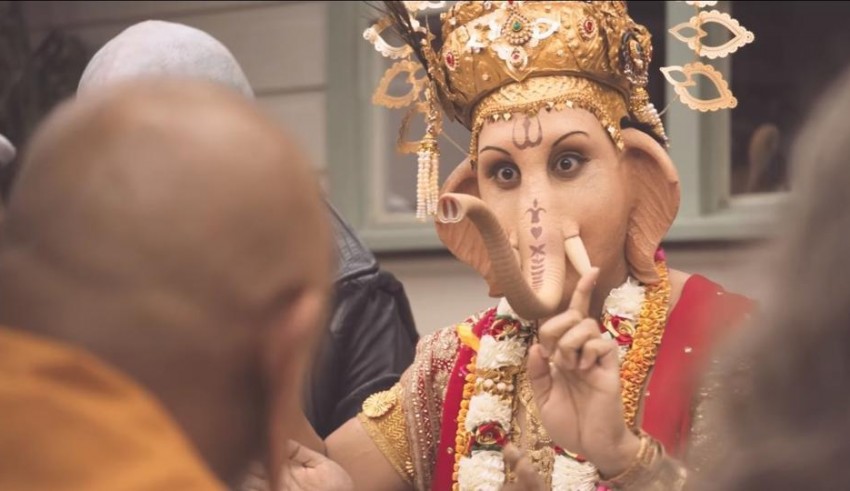 A marketing campaign for lamb, which was made with the intention of promoting inclusivity has angered the international Hindu community, which is calling for the ‘ignorant and insensitive’ ad to be banned.

Meat and Livestock Australia’s (MLA) latest campaign for lamb features a number of religious figures like Jesus, Buddha, Scientology founder L.Ron Hubbard and Greek Goddess Aphrodite – sitting around a lamb lunch. The Hindu deity Ganesha is also depicted digging in, despite being considered a vegetarian by followers of religion.

After a few seconds into the ad, Buddha asks if the others would like to acknowledge the Elephant-God, to which an annoyed Ganesha responds, “Not funny 2,500 years ago, not funny now”. His thick stereotyped Indian accent, however, hasn’t left the Hindu community too pleased with.

The ad concludes with Lord Ganesha suggesting that they should have such gatherings more often. The Indian God eating lamb and sipping on wine hasn’t gone down well with the community.

President of the Council of Indian Australians Mohit Kumar said the timing of the campaign’s launch, coinciding with the festival Ganesh Chaturthi, was particularly hurtful to Hindu community. “If MLA (Meat and Livestock Australia) has consulted properly they would have been told that depicting Lord Ganesha in this way is highly inappropriate”, he said.

As a result of all this, hundreds of people attended rallies in Australia’s major cities to protest the advertisement the Indian community described as “highly insulting” in its depiction of Lord Ganesha. The Indian Forum Australia (IFA) arranged the protests in Sydney, Melbourne, Brisbane, Adelaide and Perth in response to the advertisement which aired earlier this month.

“To say something is legal is one thing, but it’s something else to touch the heart and that is how MLA (Meat and Livestock Australia) has failed our community”, IFA head NIHAL AGAR said. “This is not the multicultural Australia that we truly love”. Earlier this month, India’s High Commission in Canberra filed a complaint with the Australian government asking for the removal of the ad.

The MLA has a history of controversial campaigns, geared at generating discussions and promoting meat consumption. Another one of their many offensive advertisements featured indigenous Australians welcoming boat arrivals to a barbecue on a beach which was described as insensitive while a previous campaign was criticized for promoting violence against vegans.

Nitin Vashisht, a spokesperson of Indian Society of Western Australia, has called out the ad for being highly insensitive. He feels that the MLA doesn’t realize how revered the Lord Ganesha is within the Hindu community and by and large the Indian community.

An official statement has been released by MLA (Meat and Livestock Australia) that says,

“Our intent is never to offend, but rather acknowledge that lamb is a meat consumed by a wide variety of cultures and captures how the world could look if people left their differing views at door and came to table with open arms and minds”.

The association said that it was meeting community groups to get the sources of their concern and claimed that it had undertaken extensive research and consultation when producing the advertisement. The body said that the advertisement sought to promote inclusiveness and not offend.

Actor Ali Fazal, who is rumored to be dating Richa Chadha, has shared an adorable photogra…