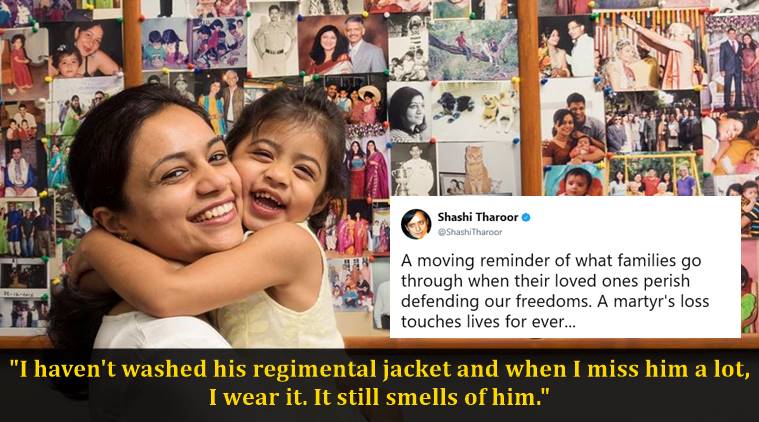 An army wife’s touching facebook tribute to her late husband has left everyone teary-eyed. The gripping tale written by Sangeeta Akshay Girish basically throws light on what families go through when soldiers sacrifice their lives to protect the country.

She convoluted how her life was beautiful with her husband and a three year old daughter when suddenly everything turned into a turmoil.

Almost a year after her husband tragically expired for the country, she has shared her journey of ‘SMILE THROUGH TEARS”
From his incredible marriage proposal with a “Red Pen drive” to skydiving as a family — they did it all.

Although, their life was pretty difficult with the many army postings all while managing a toddler, they were happy until her world came crumbling down in 2016.

She explained that ‘On November 20th they suddenly woke up at 5:30 am with the sound of gunshots. The people thought that it was a training programme but there was no intimation about the same. Soon even grenades went off and at around 5:45am, a junior came up to inform that militants had taken the artillery regiment as hostage and he had to change to combat clothing. The last thing he told her before leaving was ‘You must write about this’.

Mrs. Girish was then with other women and children in the army station, feeling skittish about receiving no updates.

It was a time filled with apprehensions, terror, stress and abstrictions but then everything became silent and dark.

She called one of the team members who told her. “Major Akshay has gone to a different location.” All her worst fears came true when she visualised her husband dead on the field.

“My world collapsed. I was inconsolable. I wish I had texted him. I wish I had hugged him goodbye. I wish I had told him I loved him one last time. But we never expect things to go wrong. I sobbed like a baby, like my soul was being ripped apart.”

However the officers managed to save the folks taken as the hostage but it took the lives of three army officers. Though they have passed away, their families and good memories still live on for all the times to come.

“I haven’t washed his regimental jacket and when I miss him a lot, I wear it. It still smells of him,”  Sangeeta added. It’s arduous to explain to her child where her father went but she takes stride in explaining

Now she is settled in a new home with her daughter where she lives through picking pictures, remembering things, holding them together, fighting through her tears and smiling despite all odds.

“We smile through our tears because we know that’s what he would have wanted us to do. Like they say, if you haven’t felt your soul being torn apart, you haven’t really loved with all you(r) heart. Though it hurts, I will always love him.”