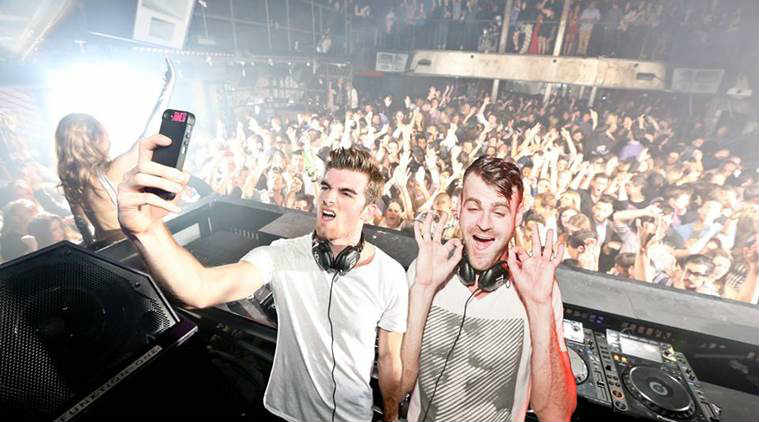 EDM Super group, The Chainsmokers performed in Delhi live on 8 September 2017 and Pepnewz brings you a sizzling account what all went down when one of the most popular artists of 2017 met their Indian fans at the Road To ULTRA India Concert in  India Exposition Mart, Greater Noida, India.

For those of you living under a rock, The Chainsmokers is an Electronic Dance Music (EDM) duo consisting of Andrew Taggart and Alex Pall. The duo burst onto the scene in 2014 with their trendy song ‘Selfie’ which became a cult hit but it was only in 2015 and 2016 that they tasted mainstream success with singles ‘Roses’ featuring Rozes and ‘Don’t Let Me Down’, featuring Daya respectively. Then their single ‘Closer’ featuring Halsey became a worldwide smash hit, topping many charts and is now considered an iconic song.
Listen to ‘Closer’ below if you haven’t already.

The hitmaker duo played a number of songs for their eager Indian fans which included Closer, This Is All We Know, Let You Go, Paris, “their favourite” Bloodstream as well as ‘We Will Rock You’ by Queen and ‘How Deep is your Love’  by Calvin Harris, to show their versatility. As can be expected of any diehard fan, the crowd went absolutely crazy, mouthing every single word!

The duo also played a personal message from Snoop Dogg wherein he asked the music producer pair to play a song from his newly released album, Neva Left.

It can be safely said that Something Just Like This was one of the biggest hits of 2017. So it was not a surprise when Alex asked the crowd to sing the song, and that too louder than the Mumbai crowd. Never saying no to a challenge, the Delhi crowd showed their vocal prowess by singing the song to their loudest. Impressed, Pall exclaimed, “It’s like 1000 degrees here, you guys are champions”.

The laid back style of the duo also won hearts of girls and boys alike. Both Alex and Drew (as Andrew is called affectionately by his fans)wore a T shirt and track pant, which was probably a good choice considering the duo were sweating right and left during the set. However, nothing could dampen the spirit of the professionals as they kept performing even more hits with Andrew even singing.

As the night drew to a close, much to the disappointment of many, Alex and Andrew came down from the stage while a round of fireworks were set ablaze in the sky.

Catch a few tweets about the concert below: