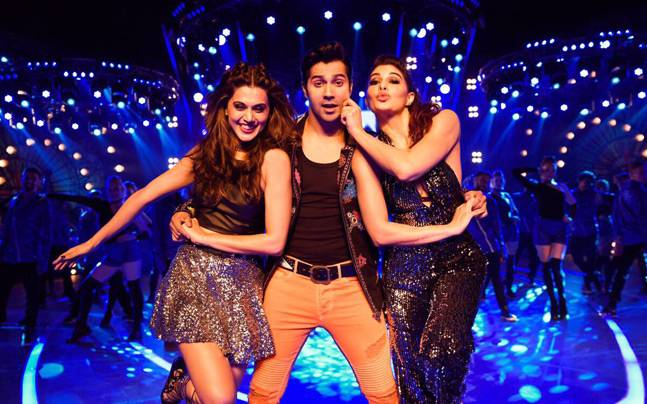 Judwaa 2 is the most awaited film of the year at least for those who lived the movie in the 90s and dance to the amazing songs of the super hit film Judwaa. The sequel of the Salman Khan starer Judwaa is all set to release in September. This time it is Varun Dhawan playing Prem & Raja in the romantic-comedy movie.

However, the first song of the movie and probably the most loved one is out today. Yes, the super hit song TANTANATAN- Chalti hai kya 9 se 12 is out now and most of the 90s kids can feel nostalgic listening to this peppy item number.

The official music launching site Saavn earlier in the day tweeted the launch of the song:

The movie has been the center of attraction since the announcement of its making. David Dhawan is once again working with his actor son Varun Dhawan and making the sequel of iconic movie ‘Judwaa’.

Varun will play a double role in the movie and will share the screen with Tapsee Pannu & Jacquline Fernandes playing Prem & Raja.

Varun earlier today shared the teaser of the song which is the revamped version of the famous song Tantanatan- Chalti Hai kya 9 se 12 from Judwaa. This song will be the part of Judwaa 2.

Undoubtedly there is a comparison between the older version and new version. Salman Khan in a silver shimmery dress dancing on the beats of the song looked too hot and Karishma was equally bright while she cheered for Raja performing on the stage.

Varun also roped in the original Mala, Karisma Kapoor and danced with her. Varun shared the video dancing with Karisma on his Instagram account.

Karisma also shared the song on her timeline:

Here are the glimpses: