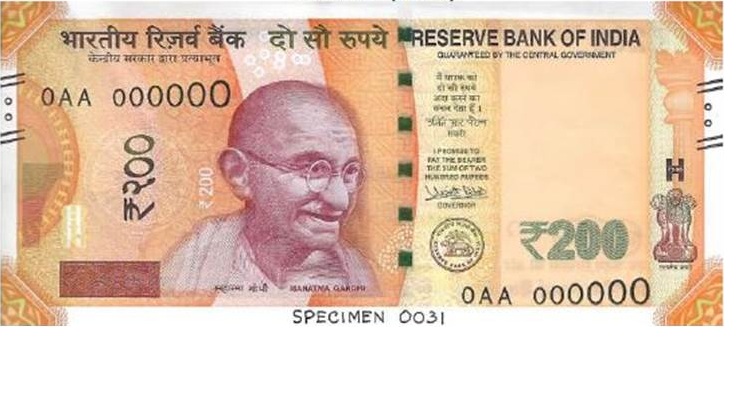 The Reserve Bank of India issued a press release in which it announced the release of Rs 200 notes on Friday, 25th of August. The bank issued vital information about the new currency note and also gave the press a first look of the note. The note bears resemblance to the Rs 500 note from the new Mahatma Gandhi Series and is of the same height as the Rs 500 note.

The bank showed the note and it was bright yellow in colour inheriting the colour from the Rs 2 note which has now been discontinued. The new currency is all theme-based and the Rs 200 note features the Motif of Sanchi Stupa on its back, depicting the cultural heritage of India. It also features the Ashoka Pillar emblem. The dimensions of the note are 66 mm x 146 mm. The Mahatama Gandhi portrait and the emblem have also been raised for the visually impaired. The rear side of the note will also feature the Swachh Bharat logo and the slogan.

The newer currency is aimed to fill in the gap created in the economy that was created post the demonetisation in November last year. Although almost 84 percent of the gap has been filled by the addition of Rs 2000 notes, introduction of the newer Rs 500 notes, and increase in the number of the Rs 100 notes. The Rs 200 note is also aimed to ease the problems faced by the public as Rs 2000 note is too high-valued. Shopkeepers refuse the note as they do not have change for it.

The newer currency will feature the Promise Clause and the Guarantee Clause with the signature of Dr. Urjit R. Patel, Governor of the Reserve Bank of India. It is hoped that the introduction of the currency will stabilise the domestic economy to some extent; with more notes in circulation, perhaps the hope of India being the Golden Bird will ignite again.