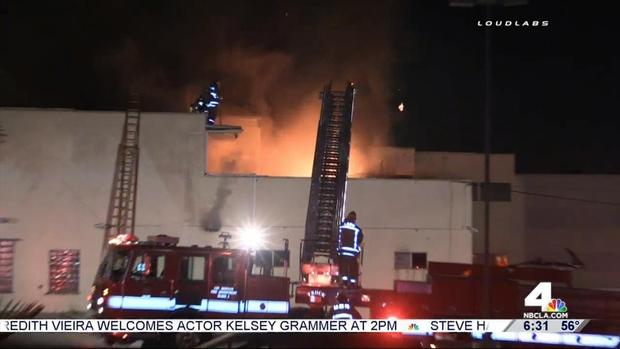 As reported to the Los Angeles County Fire Department, there was a fire at a commercial structure in West Hollywood on Wednesday evening.

As per the officials, the fire broke in the 7800 block of Santa Monica Boulevard at around 6 pm and covered a one story commercial building with the area around 1,000 square feet.

The Sky5 footage shows heavy clouds of smoke coming from a building which belongs to Executive Car Leasing business that deals in used and new automobiles as per the website.

The Los Angeles County Sheriff’s Department confirmed through their tweet that the traffic in the nearby area was blocked. The people were thus advised to avoid the area near Santa Monica Boulevard & Fairfax Avenue.

L.A. Metro also said that buses in an area close by would be diverted to the Melrose Avenue due to “nearby fire activity,” according to a tweet.

Line 4, 704: Buses detour via Melrose between La Brea and Fairfax thru 10pm due to nearby fire activity. pic.twitter.com/TKMx8zfJOE

As per the Sky5 footage also showcase firefighters climbing ladders to reach the top of the building to take control over the blaze fire. The smoke clouds are visible and indicate to the extent of the fire.

The fire fighters were on their toes to get control of the fire and showed a quick response. As per the experts, if not dealt in time, the fire would have covered the surrounding area as well.

It was great that a disastrous situation was reported at time and solved before any potential harm was caused.

West Hollywood is a closely knit neighborhood with many commercial and residential buildings. The fire broke in one of the prime area where there are many buildings close by.

A dispatcher reported that crews from Beverly Hills assisted in battling with the blaze and it was knocked down at 6:43 pm.

No casualty has been reported in the entire fire accident.