May 18, 2022
6NewArticles
Home Entertainment Bollywood Twinkle Khanna Under The Wrath Of Twitteratis For Her Recent Post 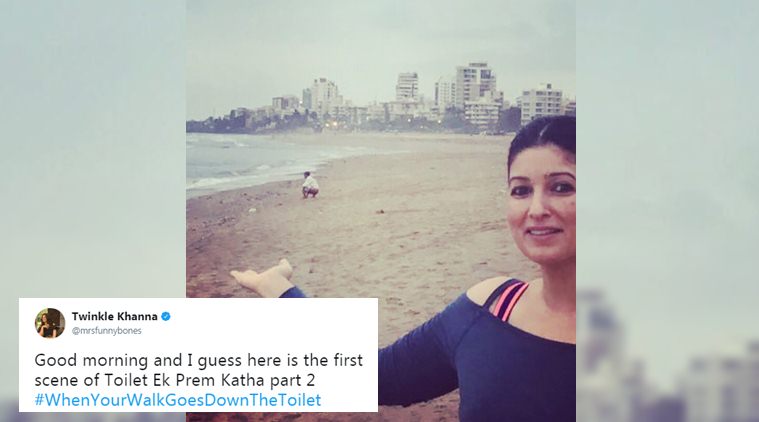 Akshay Kumar & Bhumi Pednekar’s latest release, Toilet-Ek Prem Katha has already been declared as a super hit and has reached the 100 crore club, The movie addresses the civic issue of open defecation in rural India for which even our government is trying its best to educate people. To support her husband’s work, Twinkle Khanna has always been in the promotional crew. This time, just like always, Twinkle is sharing many updates regarding the movie on her social media pages. However, her latest tweet did not garner the response she must have expected.

Twitteratis have declared her fun act to be unacceptable as it is an attempt of invasion of privacy and so, the Twitter users have showered their wrath on Mrs. Funny Bones.

Twinkle Khanna was on her morning walk on a fine Saturday morning when she spotted a man defecating out in the open. To her witty self, she clicked a picture of the man and posted it on her Twitter page alongside a caption Good morning and I guess here is the first scene of Toilet Ek Prem Katha part 2 #WhenYourWalkGoesDownTheToilet

The tweet earned her a huge response but mostly negetive as people didnot like her act of invading the privacy of someone even if the other person was at the wrongful side. Some of the reactions to the tweet are :

You are willfully tweeting an unacceptable image because he is a man n would have not done so if this was a woman. Please remove the photo.

Coz of lack of sanitation facilities he was compel to attend nature call in public. Y no initiatve to promise facilities to men.

@mrsfunnybones shaming the man is fine, imagine if someone uploaded a pic of other gender like this!!! Stop #MaleBodyShaming

@PMOIndia Twinkle u have to apologize for violating dignity of man, showing nude pic of man. why no dignity 4 men???

We are sure Twinkle Khanna meant no such harm but the fact is a fact and cannot be denied.