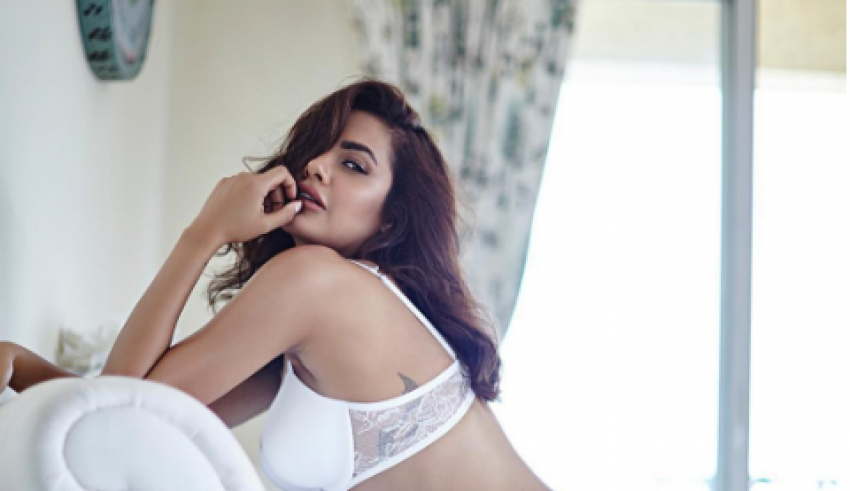 Esha Gupta in collaboration with famous photographer Arjun Mark has put Instagram on fire as the Baadshaho fame actress goes bare in her recent photo shoot.

Esha has been a point of controversy before for her jaw dropping pictures on Instagram and without any hesitation, the actress is back again this time with more flesh on the air. The actress is seen wearing a lacy black thong and holding a pomegranate cut into half to hide her lady assets. The infectious laughter of Esha is sure to make you smile once you are over admiring her perfectly toned body.

The picture is a true representation of sensuality and is very much aligned with her previous photo shoot where she was seen eating a Papaya. She chooses to caption the picture as “Healthy life J”.

All eyes on you

The photos are on heights of seduction which offers all the reasons for the rest of the female stars to envy her. With these boudoir pictures, the actress has left very little to the viewer’s imagination.

In another picture, Gupta can be spotted in sultry white lingerie. The best part of her entire photo shoot is that the Bollywood bombshell has been posting only one photo at a time. This photo shoot of her was captioned as “White Shadows”.

On the work front, Esha Gupta will be seen sharing the screen with Ajay Devgn in his next movie, Basdshaaho along with Illeana D’Cruz, Vidyut Jamwal, and Emraan Hashmi.

All eyes on you

The Jannat 2 actress shared more drool worthy pictures from her lingerie shoot to her Instagram page. After setting the temperature high on Instagram, the actress has also reached the 1k mark of followers on Twitter. She thanked her followers for making her feel so special.

Posting a hot as hell picture of her alongside the caption, ‘Thank you, 1k followers! ’ the actress showed her gratitude to her 1k followers on Twitter.